A Guelph family says they were left terrified and confused after someone broke into their home in the middle of the night.

According to the family, the person pushed out a first-floor window air conditioning unit to get inside.

At first, Ken ignored the knocking because of the hour.

He thought someone who had just left the bar likely had the wrong address and he had no intention of getting out of bed to answer the door.

As the owner of a Ring video doorbell system, he eventually decided to check his app and see who was at the door.

After the unknown man continued to knock for about half an hour, Ken decided to wake up his wife Carolina and show her the video footage.

“While we were talking, little did we know he’s breaking in through our living room. He pushed in our air conditioner," he said.

The family said the man then walked around the side of their townhouse complex and into the backyard where their air conditioning unit was pushed through the first-floor window in order to gain access to the home.

Ken said they didn’t hear this happen because the unit ended up wedged between the window and the couch. It didn’t fall directly on the floor - the soft couch caught it, which is how it was moved without making any significant noise. 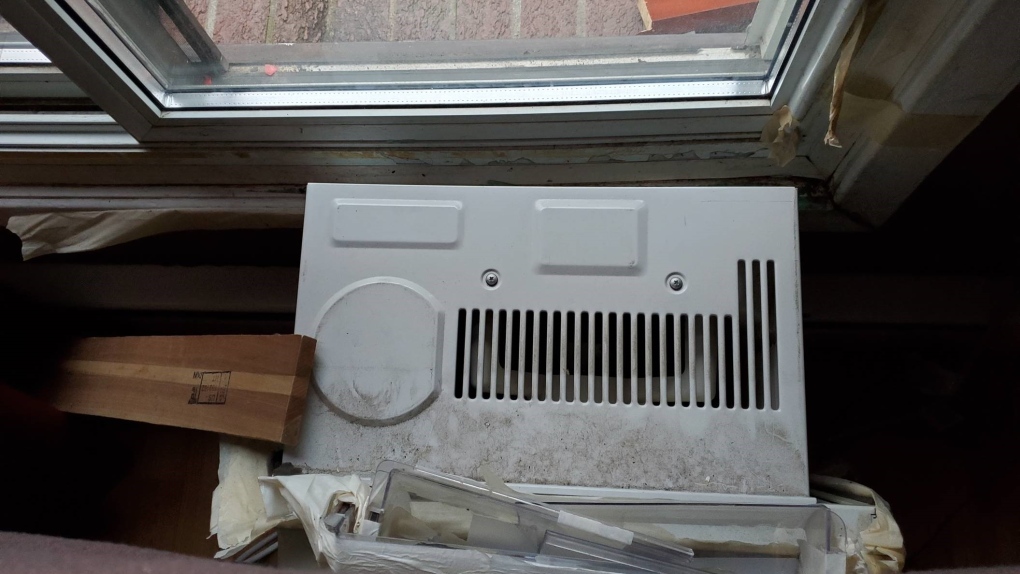 The couple said the person then walked up the stairs towards the master bedroom.

“All we heard was the doorknob slowly start to turn and we just assumed it was our child because they might have heard the knocking too and wanted to know what's going on,” Ken said.

But once the bedroom door opened it was obviously not their young child. Both husband and wife describe seeing the same thing,

“We saw the silhouette of a man wearing a hat. We were just in shock," Ken said.

“I froze a little bit because I didn’t know what to do,” Carolina said.

Both describe the next few minutes as extremely stressful.

“There was this death stare for like a couple of minutes, and I am like, ‘hello?’ and it’s just silent,” Ken described.

The homeowner then attempted to say hello two more times, raising his voice louder with each call.

Carolina said she laid in bed quiet, worried the man may have had a weapon.

“I started really panicking because for the minute that we were all staring at each other, there’s so many things that can happen," she said.

That’s when Ken decided to make his move.

“At that point, he turns around, I climb out of bed, and by the time I get out of bed he's halfway down the stairs and already out the door," he said.

Ken witnessed the man leave through the front door and run towards the exit of their townhome complex.

“I wasn't dressed so I wasn’t prepared to run through the neighbourhood," he said.

The couple is now left with many questions, including logistical ones.

“He would have had to crawl through half of the size of the air conditioner which is a very tight space,” Ken said.

The couple called Guelph police who are now investigating.

They also shared their doorbell video footage to a popular local Facebook group in hopes of identifying the man.

Blowers says he looks back and is happy is he was home at the time, not wanting to think about what may have happened if the man heard the voice of a woman, instead of his own.

“I never imagined that someone could actually do what happened Saturday morning, it’s terrifying,” Carolina added.

The family says despite multiple electronics being visible and accessible, nothing was stolen.

Besides being very shaken up, the family said they are doing okay and no one was hurt.

The couple said they will no longer be using the air conditioning unit, at least for the rest of the season.

For now, all windows will remain closed and locked. The Blowers also plan to install a second video doorbell for the backyard.