The average time Ontario patients spend waiting in an emergency room before being admitted to hospital has climbed to a level not seen in the last year.

According to new data released by Health Quality Ontario, the average patient admitted to hospital from an emergency room in July waited 20.7 hours in the ER before getting a bed on a ward.

Just under a quarter of patients were admitted within the provincial target time of eight hours. 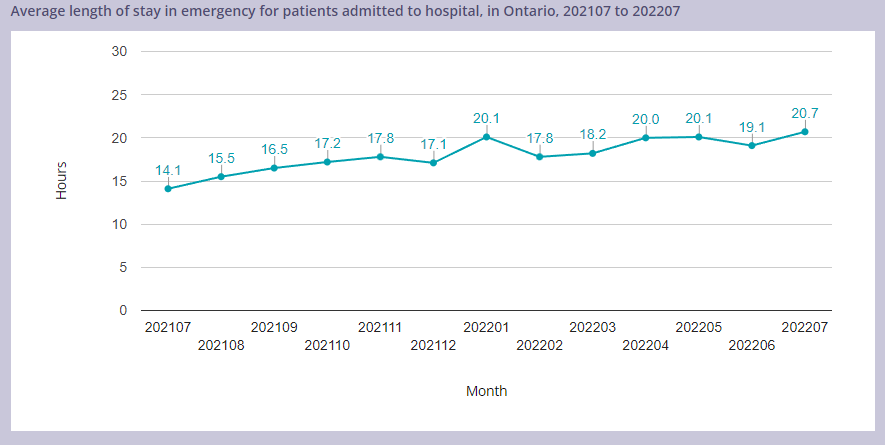 Average length of stay in emergency for patients admitted to hospital in Ontario from July 2021 to July 2020. (Health Quality Ontario)

In Waterloo region, patients waited the longest at Cambridge Memorial Hospital where the average time to be admitted to hospital from ER was 22 hours. At St. Mary’s General Hospital in Kitchener, it was 21 hours, while at Grand River Hospital it was 11.8 hours.

At Guelph General Hospital the average patient being admitted to hospital from the ER waited 17.9 hours.

The month of July was fraught with staffing shortages in the health-care sector. Overnight emergency room closures became routine at some rural hospitals, while other health networks issued urgent calls for volunteers to fill nursing shifts.

The closures prompted the provincial government to release a plan to stabilize the health-care system, which included spending on private clinic surgeries, a pledge to add up to 6,000 new health-care workers and speed up the approval process for international nurses, and Bill 7—legislation that will allow senior patients in hospital waiting to be placed in a long-term care home to be transferred to an alternative facility or face a daily $400 fee.