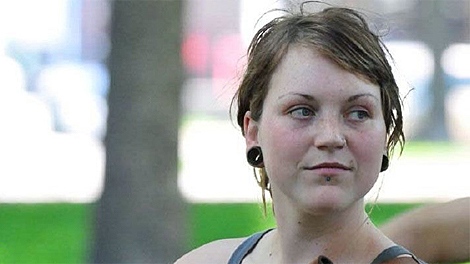 An unrepentant vandal was sent to jail for 11 months Thursday after the judge delivered a scathing assessment of her role in the destruction and terror that paralyzed the city at the G20 summit two years ago.

In sentencing an unbowed Kelly Pflug-Back, Ontario Superior Court Justice John McMahon rejected the notion she was a social activist who simply made a "bad choice" about getting her message out.

"Criminal conduct cannot be wrapped in the flag of social activism," McMahon said.

"The actions of this criminal element, including the accused, left our downtown Toronto looking like a war zone."

Pflug-Back, 24, of Guelph, Ont., had pleaded guilty to seven counts of mischief and one of wearing a disguise with criminal intent.

McMahon commended her guilty plea even though it came in the face of "somewhat overwhelming evidence," and called her exceptionally talented. But he was fiercely critical of her "nonchalant" demeanour in court and the fact she did not apologize when she had the opportunity.

"I find she exhibited zero remorse for the harm she caused," McMahon said, as several dozen supporters looked on.

As she was handcuffed and led from the courtroom, her supporters chorused: "We love you, Kelly."

In all, McMahon sentenced Pflug-Back to 15 months in custody -- some of the jail time for individual counts to run concurrently -- but granted her four months credit for her 23 days pretrial incarceration and bail, leaving her with 11 months to be spent in jail.

In addition, she was handed three years probation to follow her imprisonment, including an order to stay away from the stores she helped vandalize. That condition brought a howl of laughter from her supporters.

McMahon tore a strip off the black bloc "mob" of which Pflug-Back was an active participant for the rampage on June 26, 2010. The destruction prompted a massive police reaction that led to more than 1,100 arrests, many of innocent bystanders and peaceful protesters.

Alok Mukherjee, chairman of the Toronto Police Services Board, apologized during a meeting Thursday for police misconduct during the summit.

"Police services must be provided within a framework of respect for the charter and human rights," Mukherjee said.

"During the G20 summit, we did not always see this kind of policing and for that I am sorry."

Photographic and video evidence showed a masked Pflug-Back using a vehicle mirror and long wooden pole to help vandalize three police vehicles, smash the windows of stores that were subsequently looted, and damage an ATM.

McMahon itemized the damage to the vehicles and stores, including lost sales, for a total of more than $160,000.

While the defence had argued Pflug-Back did not mean to scare anyone and did not condone the looting of several stores, McMahon said she continued with her rampage despite knowing people were inside the stores and the window smashing would facilitate the looting.

The judge made reference to a frightened police officer trapped in one of the destroyed cruisers who said he feared for his life and was prepared to shoot to kill.

He also noted victim impact statements about terrified shoppers and employees who were in the stores attacked by criminals who were "cowardly protecting their faces with masks."

The black bloc tactics and ensuing "wanton destruction" showed a significant level of planning and "sophistication" of execution in which Pflug-Back was an active participant from start to finish, the judge said.

In addition, there were times she directed others in the attacks.

"Ms. Pflug-Back did not get caught up in the moment," he said. "She was not simply a follower."

The rampage not only caused property damage and terrified citizens, it also did "damage to true social activism," the judge noted, adding the actions "denigrated thousands of peaceful protesters."

Other convicted G20 vandals have received sentences ranging from 18 months in jail to conditional punishment.