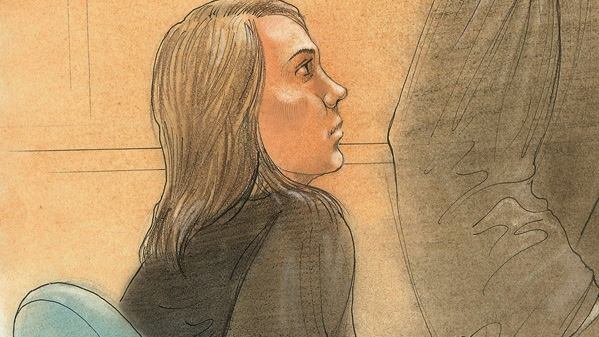 TORONTO -- A convicted G20 vandal asked a judge Friday to craft a sentence that won't interfere with her schooling but offered no apologies for her role in the mayhem that gripped the city two years ago.

The Crown, however, urged the judge to sentence Kelly Pflug-Back to up to two years, saying her guilty pleas were no indication of remorse.

The defence, which painted Pflug-Back as an idealistic social activist who wants to save the world, pressed for a conditional sentence.

Pflug-Back, of Guelph, Ont., was among dozens of protesters who used black bloc tactics in their window-smashing rampage through downtown Toronto in June 2010.

"The crimes were committed in a brazen, defiant manner without any consideration for people in their way," prosecutor Liz Nadeau told the sentencing hearing.

"What exactly was the point? What was the message? I submit there was no message."

Nadeau read victim-impact statements, including one from a 19-year-old clerk who cowered in the basement as her Yonge Street store was attacked, and one in which a police officer, assaulted in his cruiser, said he feared for his life and was ready to shoot to kill.

In another, a store manager described how dozens of shoppers and staff were terrified when his shop was attacked with the loud bang of windows shattering.

"They were just in shock really," his statement said. "Some were crying. Some were too frightened to leave."

Defence lawyer Steve Gehl, who portrayed his client in glowing terms, said Pflug-Back had no intention of scaring anyone.

A "young and impatient" Pflug-Back, who is in her 20s, wanted to draw attention to the damage mega-corporations are doing the planet and the evil they cause, he said.

"These views are socially useful -- without them, this society will fail," Gehl said.

He said Pflug-Back had no intention of entering any of the vandalized stores and was opposed to the ensuing looting.

"That's the last thing she wanted or expected," Gehl said.

"How come she then smashes the window of the next place?" Ontario Superior Court Justice John McMahon rejoined.

"The windows are symbolic," Gehl replied.

McMahon said the black bloc tactics "paralysed" the city, had nothing to with lawful protest, and frightened people caught up in the violence.

"Can you imagine the terror? They had to be absolutely terrified."

Given an opportunity to address the court, Pflug-Back spoke about an internship position she wanted to pursue, saying it depended on being able to continue her studies full time.

As happened after Pflug-Back's previous appearance, a dozen of her supporters scuffled with photographers to stop them taking her picture as she fled the courthouse.

During the hearing, court heard that Pflug-Back pleaded guilty to a mischief charge for a protest during the Olympic torch run months before the G20. She was given a conditional discharge.

Pflug-Back, who Nadeau said played a "very active" role in G20 destruction, pleaded guilty to seven counts of mischief and one of wearing a disguise with criminal intent.

Video and photographic evidence showed her -- clad in black and her face covered -- taking a pole to store windows, a police cruiser and an ATM. She also directed others in her group.

Nadeau urged McMahon to sentence Pflug-Back to 18 to 24 months in jail as a message that the "vogue" of violent protest undermines legitimate dissent and individual freedoms.

Gehl asked for a term of six to nine months if McMahon rejected a conditional sentence.

The police crackdown as a result of the vandalism led to more than 1,100 arrests. Most were released without charge.