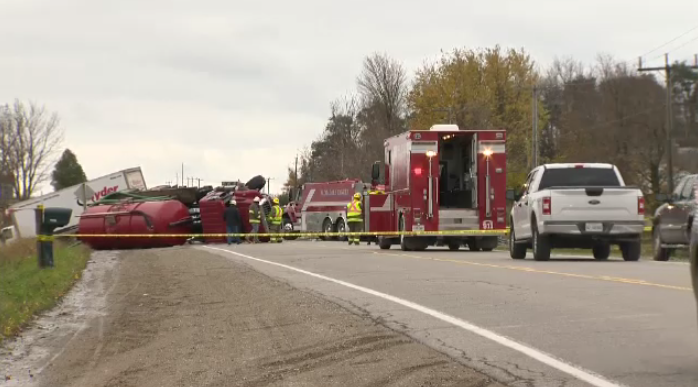 Crash in Elmira on Line 86 results in one person dead.

KITCHENER -- Police have charged a driver with dangerous driving in connection with a three-vehicle crash near Elmira that killed a young woman in November.

Brittney Martin, 22, was driving a pickup truck on Line 86 when she was hit from behind by a tanker truck on Nov. 1.

Police say her vehicle was pushed into oncoming traffic and hit by a moving truck, which is when her vehicle caught fire.

Martin was pronounced dead at the scene.

Following the crash, friends of Martin spoke to CTV News, saying she was a happy young woman, with a bright future ahead of her.

"She walked into a room and made everybody smile with her silly jokes, with her bright personality," said Rebecca Voogjarv.

Martin had graduated from Seneca College as a 911 dispatcher and was in her first year at University of Waterloo.

She had ambitions of becoming a counsellor.

"She wanted to help people and make a difference in their lives," said Karly Grass.

The driver of the tanker truck was charged with dangerous driving causing death on Wednesday by police.