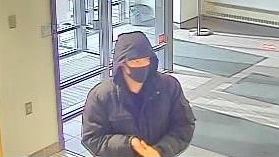 A suspect in a reported bank robbery has Brantford police asking the public for assistance.

Officers were first called to the incident just before 1 p.m. on Saturday at a bank at King George Road and St. Paul Avenue.

Police say a suspect approached a teller, told them he had a weapon, demanded money, received money, and then left on foot. No weapon was seen during the incident.

Employees and customers in the bank were not physically hurt.

The suspect is described as a white man around 5'5, slim build, between 27 and 30 years old, and wearing a black hooded jack, jeans, and a dark face mask.

Anyone who may have information is asked to contact Brantford Police Service.