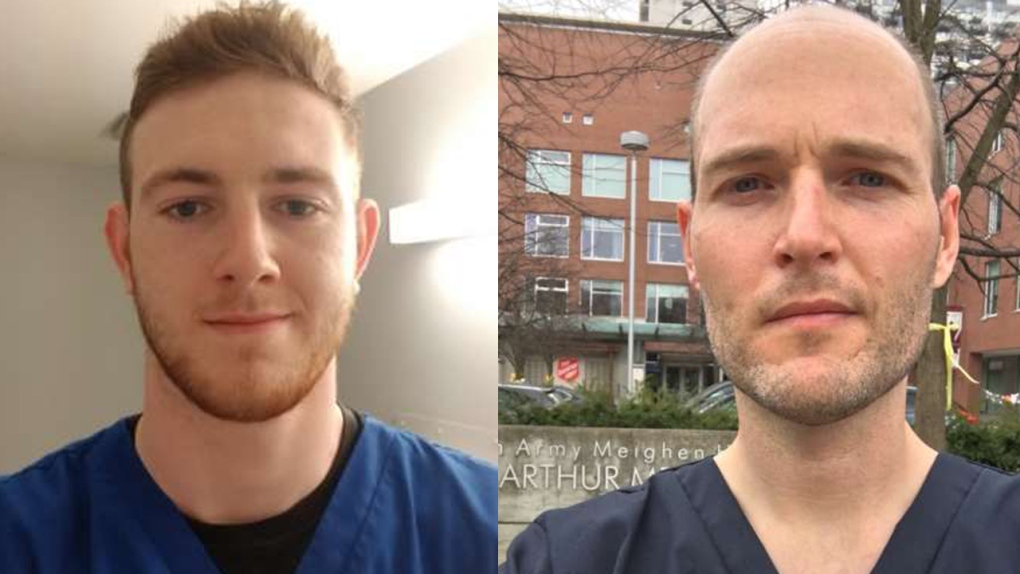 Erik Campbell-Anton, left, and Jeff Vdovjak have both started working at long-term care facilities to help out during the COVID-19 pandemic. (Source: University of Guelph)

KITCHENER -- Two students from the University of Guelph have begun working at long-term care homes in an effort to help out during the COVID-19 pandemic.

In a news release, the school says that Erik Campbell-Anton, a history major, and Jeff Vdovjak, a kinesiology major, both began working in these facilities because they were troubled by the situation there and wanted to help.

He's working alongside his grandmother and two of his aunts, who are also staff members there.

"I believe a little ray of sunshine during times like these makes all the difference, especially for residents," he's quoted in the release.

"Being able to drop in and have chit-chats throughout the day helps break the monotony of their routine.”

Ontario's long-term care homes have been hit extremely hard by the pandemic.

Over half of COVID-19 cases in Waterloo Region have been identified in staff and residents of long-term care and retirement homes. According to the region's Sunday morning update, 44 residents of these facilities have died.

"Ontario's premier says it is like a wildfire raging through the long-term care sector, and I think Erik is like a firefighter running into harm's way," she says.

Vdovjak began working recently at a long-term care home where 16 people have died from COVID-19.

It's not his first time helping in emergency situations—he has travelled abroad to do humanitarian work in the past—but he says this feels like the time to step up at home.

"Canada is in need and I am happy I can help," he's quoted in a news release.

"Our seniors are vulnerable, and they are disproportionately affected by COVID-19. In past generations, Canadians had to fight wars. I’d like to be of help now in this crisis."

Vdovjak says he hopes other students will consider following suit. For his move to Toronto, he says the Greater Toronto Hotel Association enabled him to find affordable housing.

Waiting for life to return to pre-pandemic normal? 'It won't,' PM says

Ontario unveils steps to reopen. Here's what the 'new normal' will look like

Pediatricians warned about 'COVID toes' in children infected with COVID-19

Coronavirus could be tied to a rare but serious illness in children: U.K. doctors

'The situation is dire': Provinces scramble to provide respite for homeless amid COVID-19

Health Canada issues warning against use of hydroxychloroquine for COVID-19