There are growing calls for a coroner’s inquest into the death of a 24-year-old Indigenous woman who died less than 48 hours after visiting a St. Catharines, Ont., emergency room.

Heather Winterstein’s mother says her daughter’s death was preventable and says hospital staff dismissed her calls for help because she was Indigenous. Now, the elected council of Six Nations of the Grand River – where Winterstein had family ties – is demanding the inquest happen as soon as possible.

Francine Shimzu said her daughter went to the emergency room at St. Catharines General Hospital on Dec. 9 for a back ache.

Hospital staff gave her Tylenol and Advil and sent her home at night on a city bus, she said.

At the time, Winterstein “told her dad that she felt she was feeling dismissed,” said Shimzu.

When Winterstein was still feeling unwell the next morning, her father called an ambulance to take her back to the hospital.

“She was sent out into the waiting room in a wheelchair,” said Shimzu. “She was there for three hours in the waiting area and she collapsed. She never regained consciousness and died in the ICU.”

Her family was told she died from a Strep A blood infection – the same bacteria that causes strep throat.

“When I found out how treatable this was, I felt very betrayed,” said Shimzu, who is a registered nurse.

Shimzu believes Winterstein would still be alive today had she received blood work to detect the infection and been given antibiotics during her initial hospital visit. The fact her daughter was Indigenous and experienced drug addiction played a role in the lack of care she received, said Shimzu. 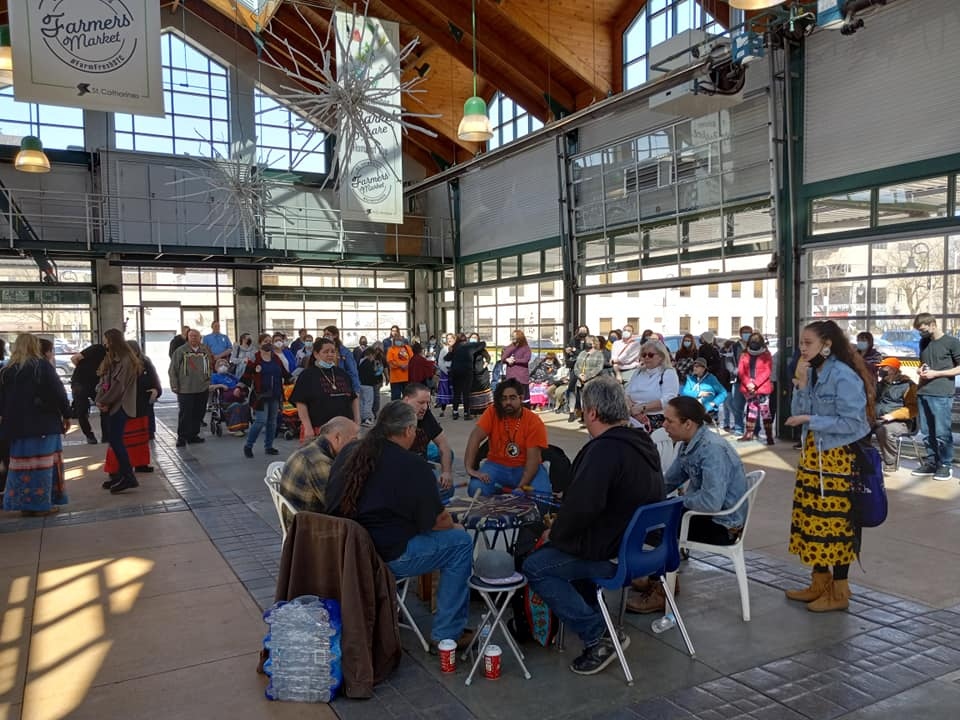 A round dance held on March 18, 2022 in St. Catharine's in honour of Heather Winterstein. (Submitted)

CALLS FOR A CORONER’S INQUEST

Shimzu wants a coroner's inquest to ensure what she experienced doesn’t happen to another family.

“I would hate for another mother to be surprised like this. To be getting up and going to work and having to miss work because you have to go to the ICU and watch your daughter die,” said Shimzu. “I would never wish that on anybody, even my worst enemy I would never want that. It's not fair.”

Indigenous leaders are supporting the family’s call for an immediate coroner’s inquest, arguing Winterstein’s case highlights why so many in their community don’t trust Canada’s health-care system.

“It's viewed as, and our people see it as, systemic racism,” said Six Nations of the Grand River Chief Mark Hill.

Hill said changes are needed to ensure Indigenous people can access the care they need.

“It doesn't matter your race, religion, culture, where you come from, if you're sick you’re sick,” he said. “And if you need assistance that should take place right away.”

In a statement issued Thursday, the president and CEO of Niagara Health, Lynn Guerriero, said the organization has conducted an internal review which “identified some opportunities for improvement.”

“We support the efforts of Six Nations of the Grand River to improve Indigenous people’s access to health-care,” Guerriero said.

“We are looking at how our emergency department functions based on best practices and the ways we identify and support members of equity-deserving groups such as Indigenous patients,” she said.

Guerriero said a coroner’s investigation into this is underway, and Niagara Health is fully cooperating.

The Office of the Chief Coroner confirms it is investigating Winterstein's death. Investigations can take up to nine months. No decision has been made yet in regards to an inquest.

‘I’M NOT GOING TO LET THIS GO’

On Friday, a round dance was held in Winterstein’s honour at the St. Catharines Farmer’s Market.

Her mother remembers her as a young woman who loved animals and art and wanted to be a nurse.

“She was just wonderful and I miss her so much,” said Shimzu.

“I’m not going to let this go,” she said. “I’m not going to allow this to be swept under the rug and have more Indigenous youth pass away from something so simple, so unnecessary and so tragic.”

Health Canada is 'exploring' whether a federal policy that restricts gay and bisexual men from donating to sperm banks in Canada should change, after CTV News exclusively reported on Wednesday that a gay man is taking the federal government to court over it.