Some school boards across Ontario will potentially close to in-person learning on Monday if a deal isn’t reached between the province and the union representing 55,000 education workers.

The Canadian Union of Public Employees (CUPE) and the provincial government will continue to meet at the negotiating table over the weekend. However, if a deal isn’t reached by Sunday evening, CUPE members will head to the picket lines on Monday.

Some families in Waterloo Region said the potential strike is leaving them in limbo.

“We both are working,” said Tina Stanley, whose daughter is in Grade 3. “It’s hard to give away a shift or adjust the timing.”

“[I'm] not a fan, especially this first year back after all the COVID disruptions,” said parent Nicole Chernukhin. “It’s just hard for the kids, especially my daughter who is in her first year of school. It’s really hard to be breaking the routine and trying to get her back into it.”

The Waterloo Catholic District School Board said it has 1,200 staff represented by CUPE. If a strike does happen, the board said it will be forced to switch to synchronous remote learning on Monday. Chromebooks will be supplied to families in need. 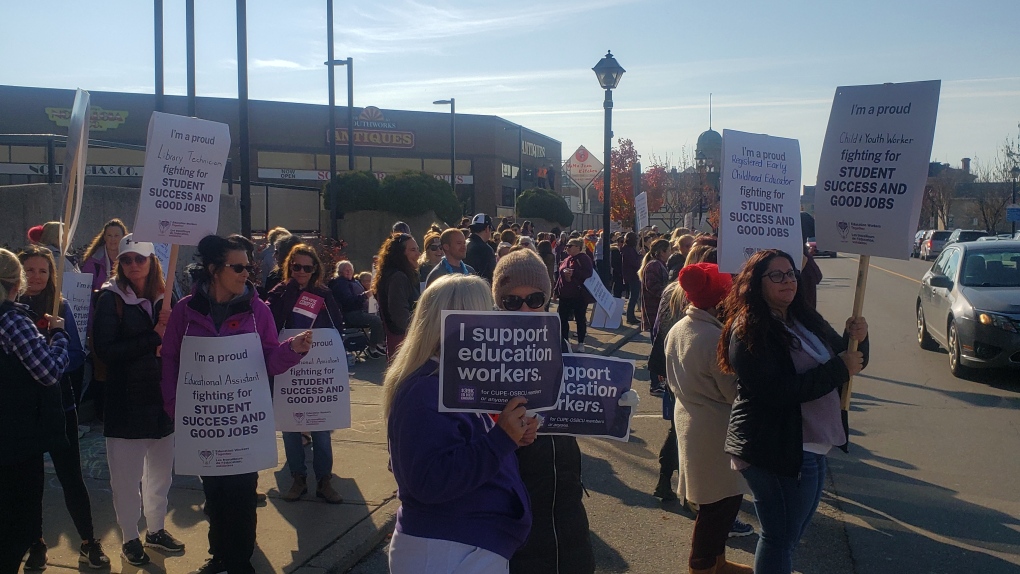 Around 200 Education workers and supporters in gather in Cambridge on Nov. 4, 2022. (Dan Caudle/CTV Kitchener)

Wellington Catholic District School Board said it will remain open on Monday, but if the strike continues it will move to remote learning.

Upper Grand District School Board said it will switch to online learning on Thursday, but only for the schools that have CUPE staff members.

The Waterloo Region District School Board is not impacted by the strike.

Families in the region said they hope the union and the province can come to an agreement before Monday.

“I like to be in school more,” said Grade 3 student Tanisha Thomas.

DAY CAMPS GETTING READY FOR STRIKE

In the event that education workers do strike, day camps in the area are getting ready to offer kids options for when they're not at school.

The Playgrounds Movement Training Center is Kitchener is planning to be open between 8:30 a.m. and 4 p.m. as many days as possible during the strike.

"Starting Tuesday, assuming a strike is announced, we're going to run strike camps," said Jessica Stone of the center. "I think if the strikes are ongoing, I forsee them filling up a bit more.

"The camps just give them somewhere to go, keep them occupied, have fun, and they get a great physical workout."

The Frederick Street camp is for kids aged six to 13 and has games, parkour, and quiet time all on the daily agenda.

This story has been updated to clarify that WCDSB plans to switch to synchronous remote learning if a strike happens, not asynchronous learning as previously stated.