Most Canadians feel positive about their lives: mental health report 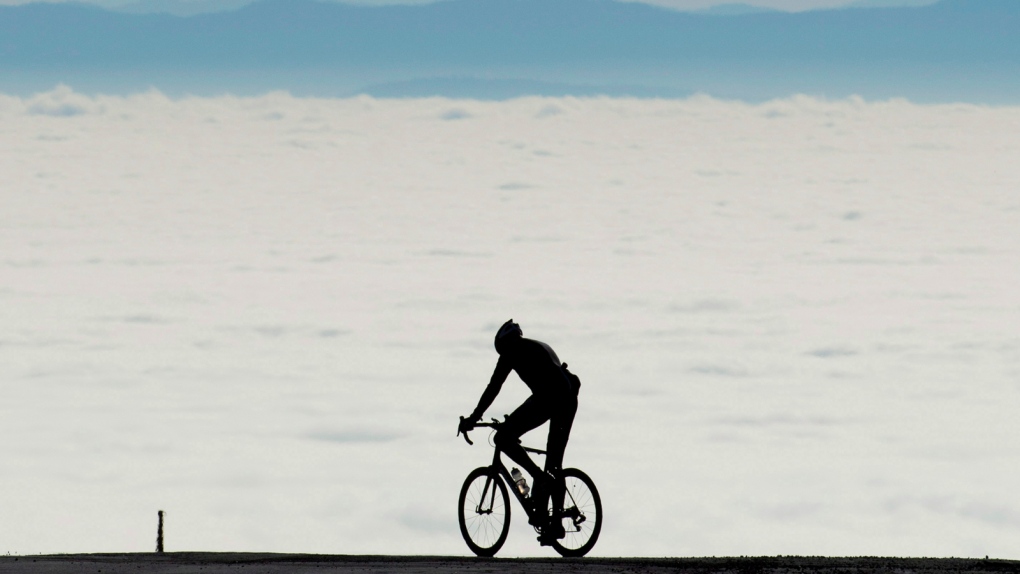 A cyclist is silhouetted on the top of Mount Seymour in North Vancouver, B.C. by the fog in downtown Vancouver, Monday, Oct. 21, 2013. (Jonathan Hayward / THE CANADIAN PRESS)

TORONTO -- More than 75 per cent of Canadians aged 15 or older are considered to have "flourishing" mental health -- feeling good about life and functioning well most days, a report released Wednesday says.

The Statistics Canada report found less than two per cent of Canadians are "languishing," meaning they experience low positive emotions and poor functioning, while almost 22 per cent are classified as having moderate mental health -- neither flourishing nor languishing.

When combined with information on mental illness, about 73 per cent -- or almost 20 million Canadians -- are said to have "complete" mental health because they are both flourishing and don't meet criteria for such major disorders as depression, bipolar disorder, generalized anxiety disorder, and alcohol, cannabis or other drug abuse or dependence.

While that figure seems to put a sunny face on Canadians' mental health status, the report's cloudier flip-side shows that one in four people don't have optimum emotional health or are struggling with psychological problems, the Canadian Mental Health Association said in reaction to the report.

"Let's not all sort of think, 'Wow, almost 77 per cent of Canadians say they have flourishing mental health; we must be doing great things in Canada,"' said national CEO Peter Coleridge. "If you unpack it, there's some cautions here.

"There's a significant proportion of our population that needs help," said Coleridge, citing statistics to illustrate that point.

One in five people live with a mental health and/or addiction issue a year; 500,000 Canadians miss work each week due to mental health problems; and among youth aged 15 to 24, suicide is the second leading cause of death after accidental injury.

The report, which is based on the 2012 Canadian Community Health Survey, also doesn't include certain segments of the population with an elevated risk of mental health problems, among them aboriginal Canadians living on reserves and other settlements; members of the military; and those in institutions like prisons and long-term care facilities, he said.

Aboriginal youth, for instance, have a suicide rate five to six times higher than non-aboriginal youth, and suicides among the Canadian military since 2002 outstripped the number of personnel killed in combat in Afghanistan by 178 to 158.

And because the report is based on a survey, in which participants answer an interviewer's questions, Coleridge said the percentages may not necessarily reflect reality.

"The discrimination and stigma associated with mental health issues, mental illnesses, in our society (means) people are judged as being weak. And responding to a survey via an interviewer, they're very unlikely to divulge information that their mental health is not so good because they would be judged.

"So the discrimination and stigma is pervasive and would have an impact on that self-reporting."

Coleridge said further investment is needed to maintain and improve the emotional well-being of children and youth because research has shown that 70 per cent of mental health problems and illnesses begin in childhood or adolescence.

Older age was found to be a strong factor in psychological well-being, with 80 per cent of those 65 and older having complete mental health, compared to 65 per cent among those aged 15 to 24.

Having a spouse or partner was also associated with having complete mental health, as was higher education and income.

People who reported that religious or spiritual beliefs were important in their daily lives were significantly more likely to have complete mental health than those not classified as having strong spirituality: 76 per cent versus 66 per cent, respectively.