A dog rescued on Highway 401 by a Good Samaritan earlier this month is now up for adoption at the Cambridge Humane Society.

The dog, now dubbed Mable, was discovered by Mississauga resident Diana Goncalves who was driving to Kitchener for work on May 1. She said she was worried about the dog’s safety so she had to help.

“She was running towards oncoming traffic in the left-hand lane. She looked a little disoriented and probably scared,” Goncalves said.

After luring the dog into her car by offering treats, she called police and soon OPP arrived on scene to take Mable to Cambridge Animal Services. 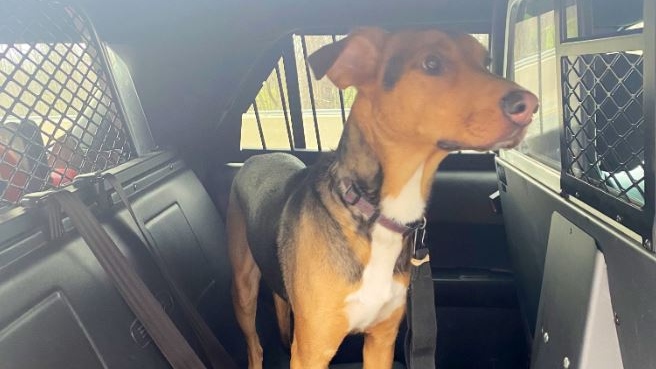 Mable appears in the back of a police car after being rescued from the side of Hwy 401. (Twitter/OPP)

Goncalves said she was hoping an owner would come forward to claim her.

“It’s been three weeks and nobody’s claimed her. That’s a bit of a bummer,” said Goncalves.

She said she has been checking in on Mable and is happy to hear she has been spayed, is fully vaccinated and ready for adoption. Goncalves even considered adopting Mabel herself, but she already is a dog mom.

“They said she would be better off in a home as a single pet so that kind of broke my heart a little bit,” said Goncalves. “I hope she goes to a home of someone with a backyard because she is 60 lbs so you’re going to need a little bit of space for her to run around and someone that has time and patience.”

According to the Cambridge Humane Society’s website Mable is playful pooch who is looking for a new family to love.

The U.S. Supreme Court has ended the nation's constitutional protections for abortion that had been in place nearly 50 years in a decision by its conservative majority to overturn Roe v. Wade. Friday's outcome is expected to lead to abortion bans in roughly half the states.

Canadian advocates are cautioning against complacency regarding abortions protections in place in Canada, after the U.S. Supreme court voted to overturn Roe v. Wade on Friday.

With the U.S. Supreme Court’s decision to end constitutional protections for abortion, 26 states are likely to ban abortions; 13 of which are expected to enact bans against the medical procedure immediately.

A Member of Parliament from rural Alberta went live on Facebook Friday to celebrate a United States Supreme Court vote to end constitutional protections for abortion.

Two people were killed and 14 wounded on Saturday in a shooting at a nightclub and in nearby streets in Norway's capital Oslo, Norwegian police said.

Miners working in a gold field in Yukon have uncovered what is being called the 'most complete' mummified woolly mammoth found to date in North America, officials announced on Friday.

An Ontario driver is speaking out after a shovel struck her windshield while she was driving on the highway.

This is who's in and who's out of Doug Ford's cabinet

Ontario Premier Doug Ford has unveiled his cabinet for the 43rd Parliament and there are some big changes to the front bench.