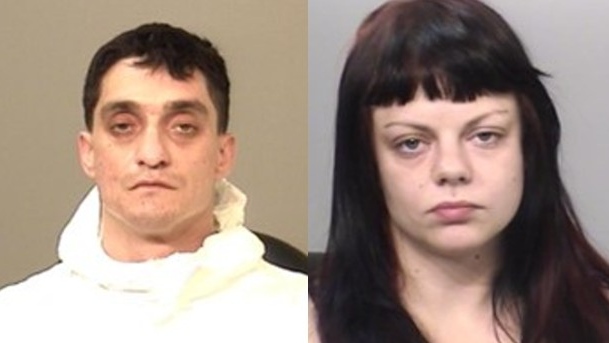 Rorey Hill and Jessica Poreba, who were wanted in the death of a 68-year-old man in Brantford, have been arrested.

The Brantford Police Service issued a media release Thursday night saying the two were taken into custody but shared no other details other than the arrests were made "without incident."

The victim was found dead at a Colborne Street home on July 22.

On July 25, police issued an arrest warrent for the two.

A few days later, police issued arrest warrants for Hill, 38, and Poreba, 41, saying both were wanted for first-degree murder.

Police say their investigation is ongoing, and additional details, including the identity of the 68-year-old man and his manner of death, "will not be released at this time."

Investigators previously stated that Hill and Poreba knew the victim.

Hurricane Ian's most damaging winds began hitting Florida's southwest coast Wednesday, lashing the state with heavy rain and pushing a devastating storm surge after strengthening to the threshold of the most dangerous Category 5 status.

Robert Cormier, a Canadian actor whose credits include 'American Gods' and the long-running series 'Heartland' has died at age 33.

Truth or bluff? Why Putin's nuclear warnings have the West worried

President Vladimir Putin's latest warning that he is ready to use nuclear weapons to defend Russia amid the war in Ukraine has made a troubling question much more urgent: Is the former KGB spy bluffing?

The Canadian generic pharmaceuticals giant founded by murdered billionaire Barry Sherman in 1974 has agreed to a takeover.

Feds tell Canadian hockey players with KHL teams in Russia, Belarus to get out

Canadians continue to play hockey for Kontinental Hockey League teams in Russia and Belarus despite the Canadian government’s warning to get out of those countries.

Dozens more British Columbians died from toxic substances in August, the province's latest overdose data shows, bringing the total number of deaths reported in the first eight months of the year close to a record.

This ship tried to warn the Titanic about the iceberg. Now scientists have found its wreckage

The wreck of a ship that tried to warn the RMS Titanic of the iceberg that sank it on its maiden voyage has been found at the bottom of the Irish Sea.

A new global study now confirms the link between a temporary increase in the menstrual cycles of some individuals as a result of the COVID-19 vaccine.

With Category 4 Hurricane Ian barrelling toward Florida on Wednesday morning, some of the state's popular theme parks. national parks, gardens, and cruise schedules have been closed or impacted.