The City of Kitchener is trying a different tactic to give an old factory a new lease on life.

The former Electrohome plant at Duke and Shanley streets had been placed up for a $1.1-million tax sale.

That amount was chosen because it was how much the city is owed in back taxes and interest.

With no takers at that price, the city is looking at writing off the accumulated interest and lowering its minimum acceptable price to just the amount of the back taxes – approximately $422,000.

Coun. Sarah Marsh, who represents the area at city council, says she’s “cautiously optimistic” that the lower price will be enough of an incentive to get the ball rolling on redevelopment.

“The neighbourhood is so ready for this property to be redeveloped and re-energized.” 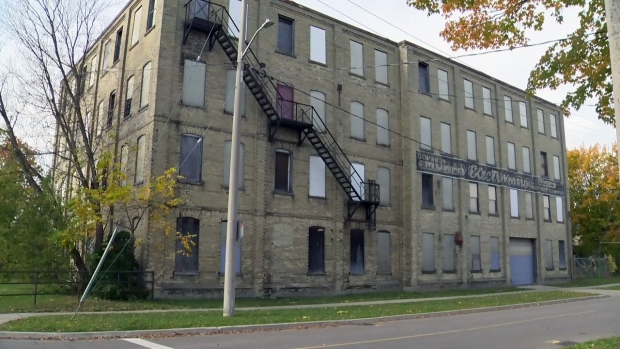 The price point isn’t the only hurdle making the property unattractive to many buyers. Also at issue is the contaminated land sitting below the factory.

The contamination is extensive enough that residential development of the site may not be feasible. City officials say retail and commercial uses are more likely.

Jeff Zavitz, a developer with experience redeveloping old buildings, says  that even without the contamination, sites like 152 Shanley Street present a number of challenges.

“You’re having to work within a shell that you wouldn’t have necessarily built that way,” he says.

“It’s not cut and dried, and you don’t really know what you’re getting into until you cut it open.”

Brenda Szasz, who lives close enough to the factory that she can see it from her backyard, says she and her neighbours are ready for something to happen after decades of idleness.

“There’s a huge resentment,” she says.

City councillors must sign off on the plan before the asking price can be lowered.

With reporting by Max Wark