3 arrested, including Kitchener man, after 55 kilos of cocaine seized 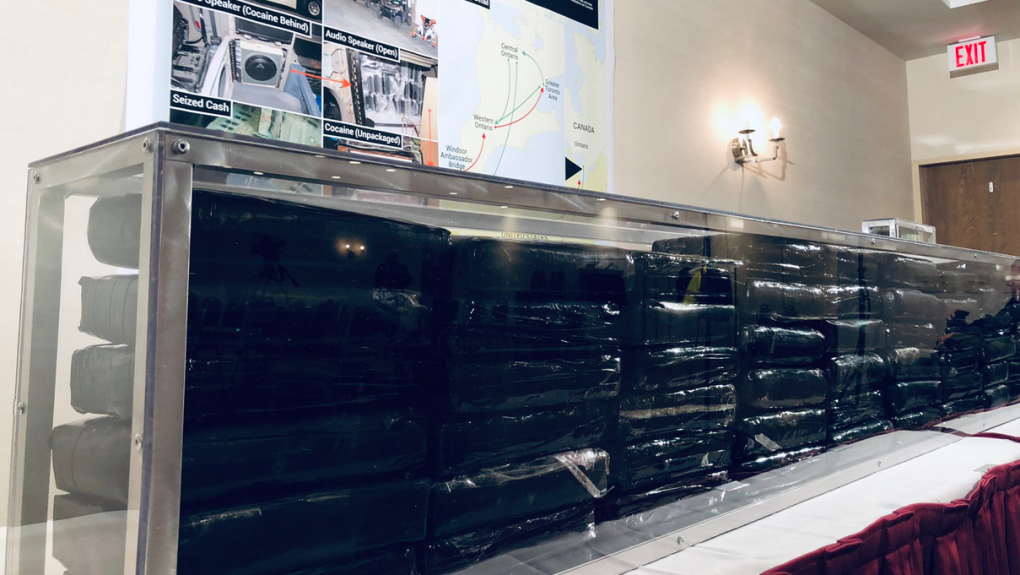 The Ontario Provincial Police said they seized 55 kilograms of cocaine and $800,000 in cash. (@OPP_News / Twitter)

Police in Ontario say they've busted an international cocaine smuggling operation with links to Mexico and the United States after a large drug seizure at the border.

The investigation dubbed "Project Tattler" began in December 2017 and has led to the arrest of three Ontario men, the seizure of 55 kilograms of nearly pure cocaine and about $800,000 in cash, provincial police said Wednesday.

"Illicit drugs are still being pumped into our communities and the culprits are sharing profits in the millions of dollars," OPP deputy commissioner Rick Barnum told reporters at a news conference in Barrie, Ont. "We firmly believe this investigation has made a difference."

Police said the cocaine -- 90 to 96 per cent pure -- came into the country on a transport truck from California, but investigators have linked money in the alleged smuggling operation to Mexico, where the drugs may have originated.

Barnum said the drugs eventually ended up in central and southwestern Ontario and in the Toronto area.

"The individuals involved in this effort were well organized, they were very sophisticated and they had devised a distribution network that spanned three entire countries," Barnum said.

Police did not say just where the cocaine crossed the U.S-Mexico border, which Mexican drug cartel was allegedly involved or whether the operation had ties to organized crime groups in Ontario.

The cocaine haul was discovered after Canadian Border Services Agency officers, acting on information from the OPP and with help from the U.S. Department of Homeland Security, stopped the transport truck on Feb. 19 as it tried to enter the country through Windsor, Ont.

Inside the truck's cab, a drug-sniffing dog focused on a built-in speaker, authorities said.

There were two wires in the cab area of the truck that, when connected to a battery, opened a compartment hidden inside the speaker, said Det. Insp. Mark Loader.

Using a variety of tools and after an "extended examination," officers managed to open the compartment, said Rick Comerford, a regional director with the Canadian border guards.

"It was definitely a professionally modified compartment and not something that is normally found in a commercial motor vehicle," Comerford said.

Within that compartment, police said they found 55 one-kilogram bricks of cocaine.

Police have charged the alleged driver of the truck, Slobodan Poznic, 44 of Kitchener-Waterloo, with importation of drugs and various trafficking-related offences.