Why hasn't the Ezra Avenue party been cancelled? A breakdown

Read the original story below.

As governments, businesses and citizens around the country take increased measures to prevent the spread of COVID-19, a serious public health concern remains in Waterloo.

But still, people are expected to attend this year's unsanctioned St Patrick's Day party on Ezra Avenue, despite authorities' public pleas for them not to go.

Dozens of people have phoned in to CTV News, taken to Twitter or called Waterloo MP Bardish Chagger with the same question: why hasn't the party been cancelled?

We are in critical times. I need you to be considerate and please stay off Ezra for #StPaddysDay. My office is inundated with concerns about the health & safety of #Waterloo parents, students, & residents. Please help contain, not inflame, #COVID19. #safetyfirst https://t.co/FyE208qhOJ

It's already an illegal gathering

The parties that take place on Ezra Avenue have been the subject of much debate over the years because there's no clear and easy solution.

The biggest problem is that the parties aren't allowed: they're already unsanctioned.

"The gathering is illegal and dangerous," a statement from Waterloo Mayor Dave Jaworsky issued last week reads in part.

"It poses significant health risks and the spread of COVID-19 is a very real concern."

There's no event organizer who can be contacted to get people not to go. Nobody can face fines for throwing the illegal party because no one person is responsible for it.

The gathering has also become part of the local culture. That's something a task force has outlined as an area of change for the future.

Why not close the road?

Closing Ezra Avenue has never been the solution.

"We've been having this conversation for six years and the easy answer is, 'well, just close the street,'" Larkin said at the time.

On Monday, though, when asked again, he put it more bluntly.

There's also no guarantee that closing the street would stop the party—it would just stop it from being on Ezra.

In years past, the tens of thousands of attendees have often found themselves on adjacent streets anyway.

What is being done to prevent people from going? 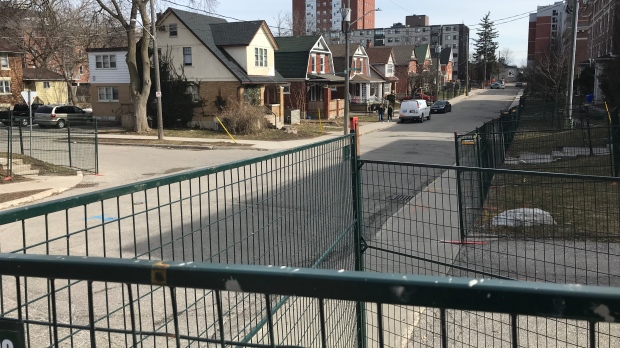 Police aren't the only ones trying to quell the party.

Region of Waterloo Public Health, each of the post-secondary schools in the region, Mayor Dave Jaworsky and numerous other community partners have weighed in, imploring people not to go.

Community leaders also took to the streets a week before St. Patrick's Day, knocking on doors and asking people face-to-face not to go to the party this year.

On Monday, the Chief Public Health Officer of Canada, Dr. Theresa Tam, emphasized that Canadians should not gather in groups of more than 50 people.

On the ground, billboards and electronic messaging promoting public health and discouraging the party have gone up.

Fencing has also been put around properties on Ezra in an effort to protect properties there.

Crowd control pods, which were tested at homecoming in the fall, are expected to make a return as well.

Police will also be on the ground as has been the standard in years prior. They'll be encouraging party-goers to disperse as well.

Canada shutting the border to most non-citizens due to COVID-19: PM Trudeau

How the pandemic is playing out on the B.C.-Washington border

Canada's workforce having to adjust to working from home

'The time has come': Cineplex closing all theatres across Canada

Canadians in Europe provide a glimpse of life under lockdown

Tokyo Games on for now, but some Canadian athletes wonder how to get there