For the last week, tents have been set up on the island in Kitchener’s Victoria Park as part of an annual protest.

So far, around 10 tents have popped up in the park, and a large banner has been hung on the pavilion indicating the motives for those organizing the demonstration.

The number one demand listed on the large banner calls for an end to the evictions of campers on city and regional land. It also calls for the decriminalization of drugs and for the expansion of safe supply resources in the city.

Julian Ichim, a community activist organizer, said first and foremost, the camp is a place to be yourself and to exist.

“Because that's what the issue is, people have the right to exist, and for people to exist, they have a place to live and sleep,” said Ichim.

The demonstration typically takes over parts of the park for several weeks, however, this year Ichim said they could be in the park for much longer.

“Until we get our demands, so anywhere from a week until we will see,” said Ichim.

This camp is not far from the large encampment that's been at the corner of Victoria and Weber streets since March.

Those at Victoria Park said they stand in solidarity with the camp at Victoria and Weber Streets, and anyone from that camp is welcome to come here.

Last Thursday, the eviction date for that encampment came and went with most people choosing to stay.

Catherine Huras, along with her friends who get together in the park once a year, said they are not put off by the idea of sharing the space with the protest. 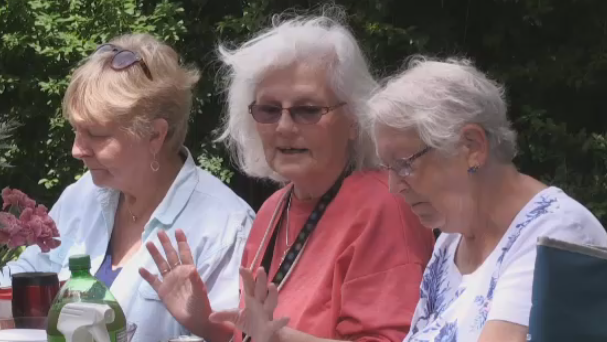 The camp in Victoria Park has stayed roughly the same size for the last week.

“I don’t think we have answered the question where do people [go] when they are mentally or physically unwell, and they don’t have a home,” said Huras.

Bethany Rowland, director of corporate communications and marketing at the City of Kitchener told CTV News in an email the city has been talking to the demonstrators in Victoria Park.

“Demonstrators have expressed that they intend to leave Roos island once their demonstration is complete. This annual demonstration is not meant to be an encampment. The City and the demonstrators continue to have open dialogue to ensure the park is kept clean and safe for other users of the space while this small area is temporarily occupied,” Rowland said, in part.

She added the city continues to advance its housing strategy and work with other levels of government to “ensure we move closer to a community where everyone has a place to call home.”