Up to 20 teens involved in Kitchener fight

Up to 20 teens involved in Kitchener fight

Waterloo regional police are looking for up to 20 teens who were reportedly involved in a fight with weapons in Kitchener.

Officers responded to the incident around 7:15 p.m. on Monday, July 11 in the area of Fairway Road and Wilson Avenue.

A group of 15 to 20 youths were reportedly gathered in the area while some were engaged in a fight.

Paul Buckley, who works nearby, said it was strange to see such a large group of teens gathered at night.

“I mean there’s the bus and the mall nearby so it’s fairly normal, but I don’t usually see 15 or 20 sitting on the hill,” said Buckley.

Weapons, including a hammer, were brandished during the fight, according police.

Police say they found no one involved in the incident when they arrived and nobody was injured. 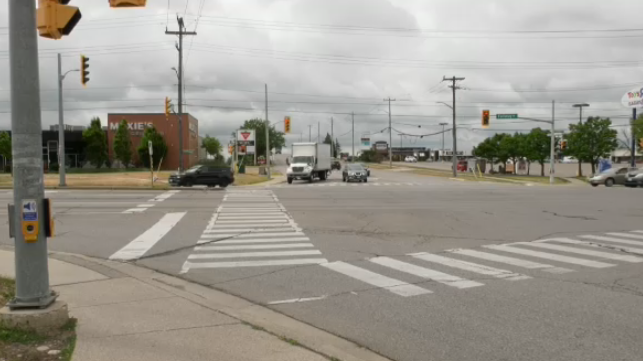 The intersection of Fairway Road and Wilson Avenue in Kitchener is seen on July 12, 2022. (Dave Pettitt/CTV Kitchener)

Buckley estimates the teens were around 13-years-old, adding that he didn’t notice any trouble until police arrived.

“I just saw a group of kids, just milling around, hanging out, loitering just back there,” said Buckley.

Buckley said it’s sad that kids are getting into fights, but isn’t all that surprised with the way crime has increased.

“I’ve been working in this area for 17 years and it's becoming more frequent,” he said.

Police were unavailable for an interview, but say they are looking to speak to any witnesses.

Anyone with information is encouraged to contact police or Crime Stoppers.

Delay behind them, UCP set to begin to announce results

Following an hour and a half delay, the United Conservative Party is releasing the results of its leadership vote on Thursday.