The thunderstorm may have only lasted a few minutes, but it left hours of work in its path.

After Tuesday night's storm, Waterloo Region residents and emergency crews were busy Wednesday cleaning up downed trees and damaged property left by the nearly 120 km/h winds that blew through the area.

An 80-foot tall maple tree in front Lara Swift's Glasgow Street home in Kitchener was split in half, hitting her house before landing on the yard.

"Peeked out the window just in time to see the top of this giant tree just go," she said. "It was loud, loud and intense, I was really worried it was going to go through the roof." 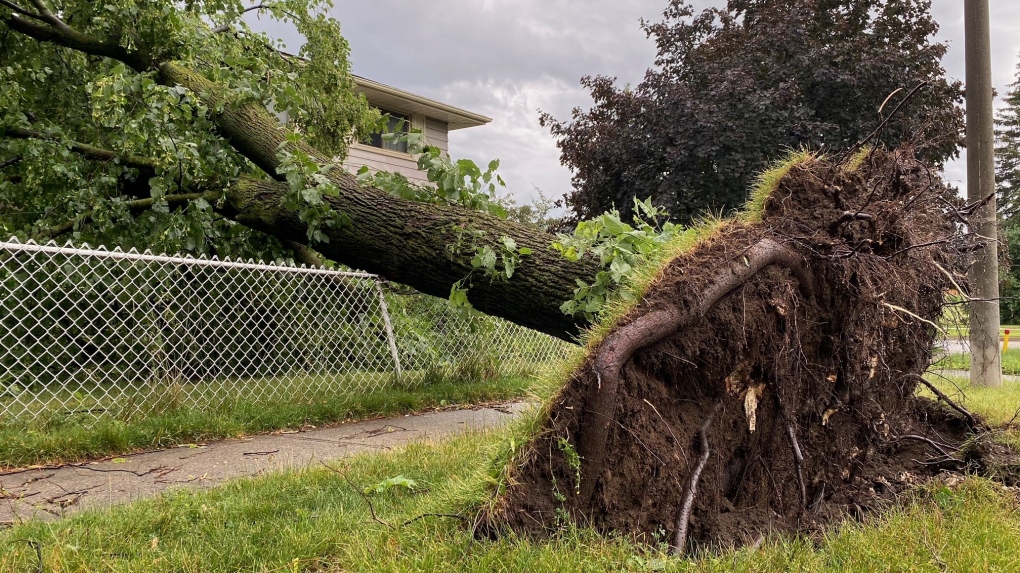 A tree near Knell and Westwood Drives was knocked down during the Tuesday night storm. (CTV Kitchener)

The tree shattered a window and damaged part of Swift's roof. She estimates cleanup will take a while.

"All the neighbours got out with their chainsaws and cut up all the big branches and pulled them off the road," Swift said.

Part of the tree still stands on her neighbour's lawn.

Some Kitchener residents were shocked by the power of the storm.

"It's really surprising that the wind can be that intense, in that short span of time to actually bring a tree like this down and cause this much damage," Justin Flip said.

"A good hour and a half cleaning up all the branches that had fallen yesterday and cutting them into smaller pieces to drag to the front," said Lyndsay Brown.

"That was the biggest storm I've ever seen go through. Branches just falling, it looked like my yard was filling up," said Gwynne Redford. 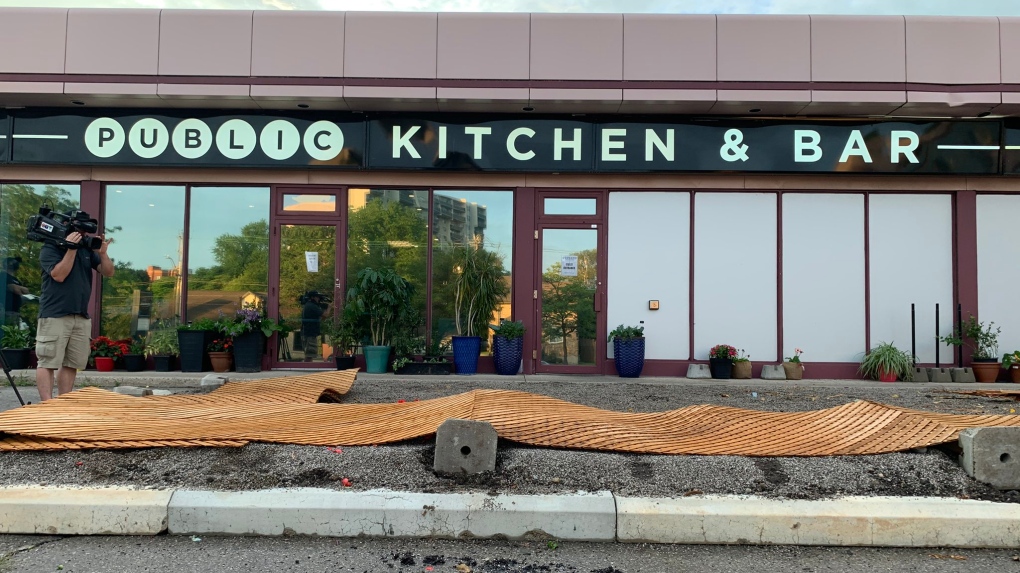 Damage to the patio at Public Kitchen and Bar in Kitchener. (Jeff Pickel/CTV Kitchener)

Homeowners weren't the only ones dealing with the aftermath.

Waterloo regional police say they received more than 100 reports of dangerous conditions, most related to the storm.

Kitchener-Wilmot Hydro was also kept busy due to downed power lines. About 15,000 customers were without power at the peak of the storm. Power has since been restored to most customers.

At Public House Kitchen and Bar in Kitchener, the newly set up patio was completely destroyed.

But the owners arrived to a surprise Wednesday morning, with the walls of their patio fixed.

"It's impossible to be in despair when you have the entire community come to your side," Blasutti said.

A Canada-wide warrant has been issued for a man who police say fled the Toronto area after allegedly killing an Ontario couple that disappeared earlier this month.

PM Trudeau to name new cabinet in October, Parliament to meet this fall

Prime Minister Justin Trudeau says that he intends to name his new cabinet in October, bring Parliament back 'before the end of fall,' and implement the promised federal vaccine mandate as soon as possible. Chrystia Freeland will continue as deputy prime Minister and finance minister, Trudeau said.

DEVELOPING | 35 of 39 miners trapped underground in Sudbury, Ont., have now been rescued

A total of 35 of the 39 people stuck underground at Vale's Totten Mine in Sudbury, Ont., have now been rescued, Vale reported late Tuesday afternoon. A team of doctors is on-site and checking workers as they emerge from underground.

Prime Minister Justin Trudeau says he hopes to share a decision on whether to ban Huawei Technologies from Canada's 5G wireless network rollout 'in the coming weeks.'

The Assembly of First Nations and other Indigenous advocates are skeptical of the Canadian Conference of Catholic Bishops' $30-million pledge to residential school survivors, demanding the church be held accountable for its commitments.

'She cannot have died in vain': Anniversary of Joyce Echaquan's death marked with calls to fight racism

A ceremony was held Tuesday marking the one-year anniversary of the death of Joyce Echaquan, an Indigenous woman who was humiliated by staff in a hospital northeast of Montreal as she lay dying, sparking outrage across the country.

Three people have been arrested in connection with what police are calling a 'million-dollar heist' from a business near Toronto Pearson International Airport last spring.