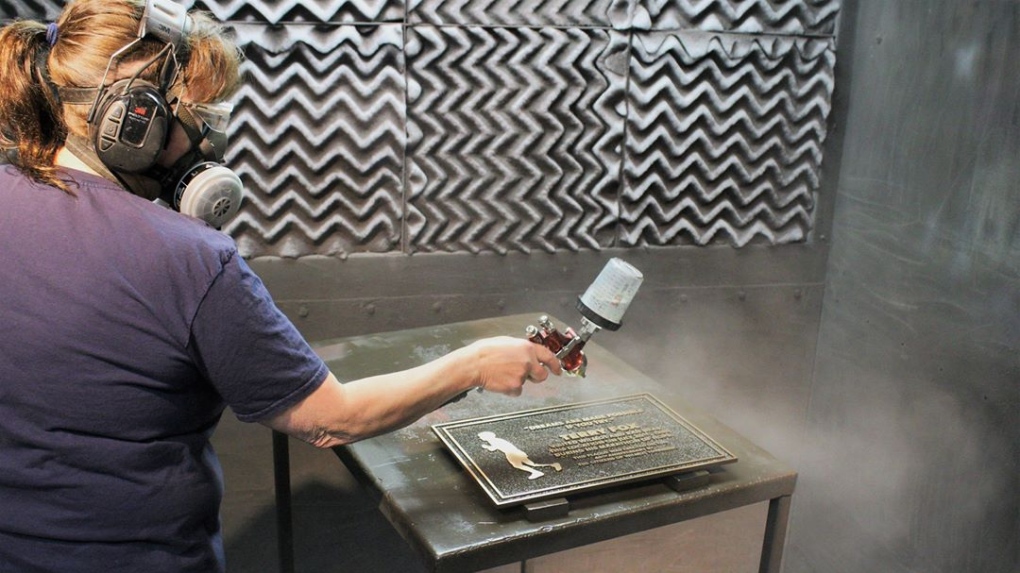 KITCHENER -- Forty years ago, Terry Fox travelled through Wilmot Township as he made his way across eastern Canada during his Marathon of Hope.

He ran through the area on July 20, 1980. Four decades later, the township has put up a plaque in a park near his route. 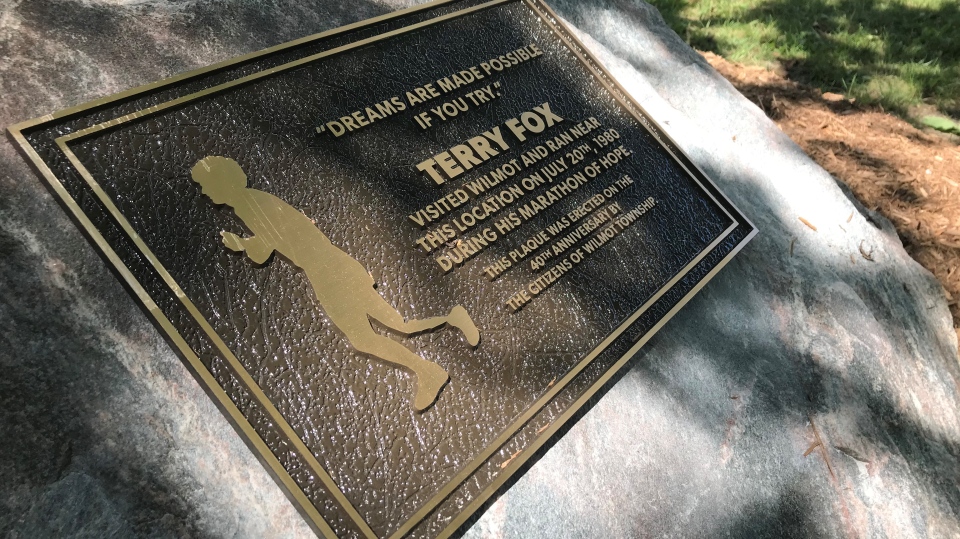 “To celebrate Wilmot’s role in this historic event, there will be a ceremony to unveil a memorial plaque in Terry’s honour,” said Wilmot Coun. Cheryl Gordijk in a video posted to her Twitter account.

On July 20, 1980, crowds gathered as Fox ran through New Hamburg, Baden and Petersburg, stopping for a rest break in New Dundee.

The idea for the memorial was submitted to Fox’s family by Gordijk’s husband, Nigel, and approved last year.

Together the couple organize the local Terry Fox Run.

"We decided that Petersburg Park would be the best place for it because it's publicly-owned, and it's closest to where he ran," said Nigel. "There's lots of foot traffic there, so people can can stop and look at the memorial."

Fox ran down Snyder's Road when he passed through the township in 1980. The plaque is only a few hundred yards from that route.

Runs honouring the Marathon of Hope started in 1981. Wilmot Township held its first run in 1996 and Gordijk has been the organizer for the past eight years.

40 years ago, the Marathon of Hope connected communities across Canada. On Sunday, July 20, 1980, Terry Fox made his way through New Hamburg, Baden and Petersburg, taking a well-earned rest in New Dundee before completing the day’s run. Fox left an indelible footprint in history with his heroic efforts. Local residents share their memories of the day that the Marathon of Hope came to Wilmot. @terryfoxcentre @terryfoxfoundation @marthamcclew @k_smith2020tfr @dbacfox @freddiemfox @vigsforshort @ahallmanrmt @jennpfenn @cherylgordijk @timlouiskitcon

The plaque has a quote from Fox, reading, "Dreams are made possible if you try."

Local companies donated time and materials to make the project a reality.

New Hamburg’s Riverside Brass produced the plaque for free, while the granite rock that the memorial will be mounted on was donated and put into place by Petersburg’s Tri City Materials.

"I thought it was a momentous event that should be recognized in Wilmot," Gordijk said. "It connects us to so many communities across Canada, the fact that Terry ran so far from St. John's in Newfoundland to Thunder Bay, and we're just one of the places he touched along the route."

While working to install the plaque, Gobrijk said he spoke to a man who was 10 years old when Fox ran through Wilmot. Fox high-fived the man as he ran past, heading west across Ontario.

Fox also spent several hours at a home in New Dundee, taking a break between his morning and afternoon runs.

The Wilmot Terry Fox Run and the Terry Fox Centre have gathered some of Fox's diary entries from his Marathon of Hope, tracking his run through Ontario.

#Repost @terryfoxcentre • • • • • • Brantford, Ontario From Terry's Journal: Day 95 - 21 miles - Total 2220 miles "Today was again a very difficult day. The wind was terrible and I was tired. I ran hard and fast but was tired and drained. The only thing that kept me going was the fact that the people of Brantford were waiting for me and I made it there! It was Darrell's birthday today, what a way to spend it!" #terryfoxrun2020 #terryfoxrun #terryfox #marathonofhope #Ontario #Brantford @ontarioprovincialpolice @cbcnews @cancersociety Please invite your friends to like/follow the Terry Fox Centre! If you or anyone you know has a picture of Terry from his marathon 40 years ago, please share it with us.

Here's when he passed through some of the towns and cities in the area:

"Many people I've spoken to get really emotional when we talk about Terry Fox," Gordijk said. "I think it was his values and his humility his selflessness, the sheer hard work that he put into the course."

Gordijk wants people to see the new plaque and feel connected to Fox and his journey.

"I'm hoping that people will, whenever they possibly look at it, they'll feel uplifted and inspired by Terry," he said.

This year's Terry Fox Run will look a bit different since people won't be able to gather in large groups due to the COVID-19 pandemic. Instead, Gordijk said people are encouraged to take part on their own time, but still donate.

"There's still progress that needs to be made in the finding a cure," Gordijk said. "But there are so many people who are now surviving cancer who wouldn't have done so years ago."

The distanced run this year is scheduled for Sept. 20.