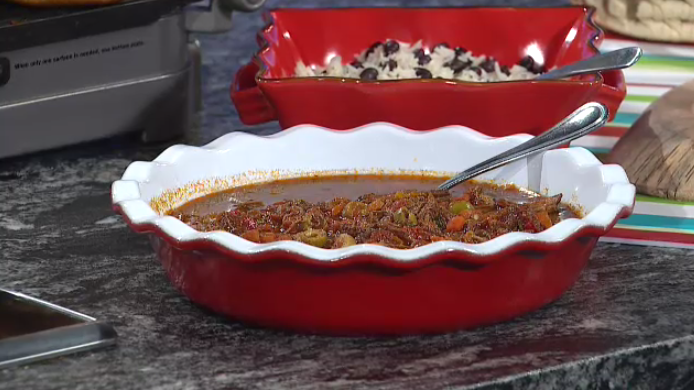 KITCHENER -- Ropa vieja means “old clothes” in Spanish, and the dish got this name because the beef is slow-cooked and shredded to resemble tattered clothing.

Blot beef dry with a paper towel and cut into10 large pieces. In a large skillet, heat half the oil over medium-high heat. In batches, add beef and cook for 5 minutes per side or until browned, adding oil as needed between batches.

Using a slotted spoon, transfer beef to a 4- to 6- quart slow cooker. Add carrots, red peppers, green pepper and onion to the skillet and cook, stirring, for about 5 minutes, until vegetable just begin to soften.

Add garlic, cumin, oregano, salt, black pepper, hot pepper flakes, paprika, cinnamon, cloves and tomato paste; cook, stirring, for 1 minute. Transfer mixture to slow cooker, along with tomatoes. Add broth to the skillet and bring to a simmer, scraping up any browned bits from the bottom of the pan; pour into slow cooker. Cover and cook on Low for 8 hours, or on high for 4 hours, until beef is tender . Skim off any excess fat.

Tip: This dish is traditionally made with flank steak, but you can substitute boneless blade roast, if you prefer.