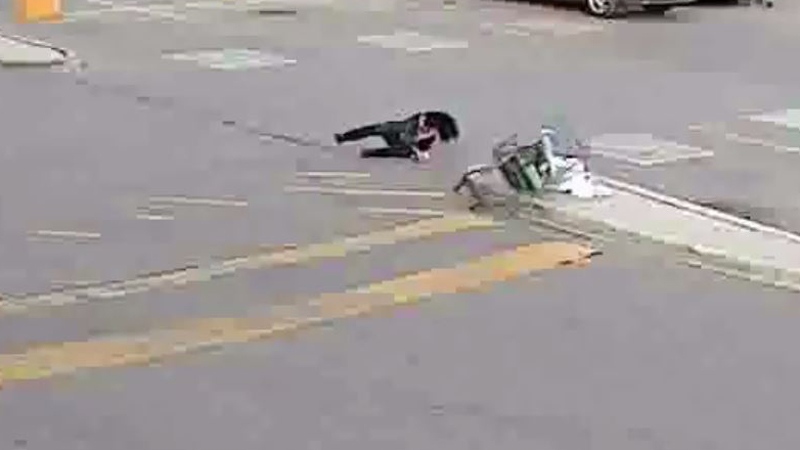 A woman suspected of stealing merchandise from the Walmart store in Fergus tripped and fell to the ground after leaving the store. (Ontario Provincial Police / Twitter)

A thief who made it out of a store in Fergus with items she hadn’t paid for didn’t get much further.

According to the OPP, the shoplifter visited the Walmart on St. David Street on April 26.

Surveillance camera footage from outside the store shows the woman quickly pushing her cart away from the store.

At one point, the woman loses her footing and the cart careens into a curb, where it tips over and spills its load. The woman then gets back on her feet and walks away without the merchandise.

Police said Friday that the woman’s cart contained more than $650 worth of stolen items.

They also said it wasn’t the first time she had stolen goods from that Walmart. Store employees told police that she had stolen nearly $2,500 worth of products a few days earlier.

In both cases, she was allegedly helped by two men and three women.

OPP describe the woman as being white, likely in her 40s, and weighing about 165 pounds. They say she has glasses, as well as a tattoo on her back, and was seen wearing a light-coloured long-sleeved shirt and black pants.

The men helping her are believed to be in their 30s. One of them has short, dark hair, while the other was seen wearing a red and white baseball cap.

The women are all believed to be in their 20s. Police say one has long dark hair, a second has long blond hair, and the third “is prone to concealing her face.”

Anyone with information is asked to contact Wellington County OPP or Crime Stoppers.