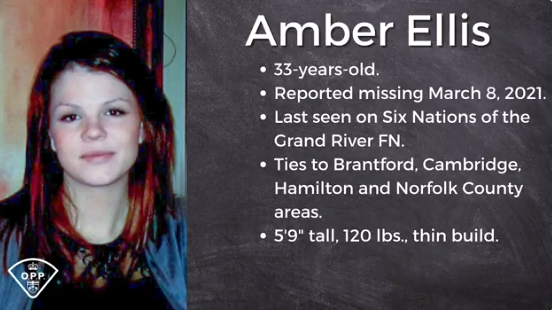 Haldimand County OPP believe someone has information that could help solve the disappearance of Amber Ellis.

The 33-year-old was first reported missing by her mother on March 8, 2021. She was last seen near the end of February on Six Nations of the Grand River First Nation.

Before her disappearance, Ellis lived in Hagersville and also has ties to Brantford, Cambridge, Hamilton and Norfolk County.

In December of last year, OPP released a video with pleas from Ellis' family to help find her.

On Friday, police issued another media release encouraging the public to come forward.

"After interviewing dozens of witnesses, I believe that there are additional witnesses who have information that can help solve this case, and I encourage them to contact police immediately," said Detective Inspector Chris Josiah in the release.

Authorities in Western Australia on Wednesday recovered a tiny but dangerous radioactive capsule that fell off a truck while being transported along a 1,400-kilometre Outback highway last month in what an official said was like finding the needle in the haystack.

An Alberta First Nation is to sign an agreement today with Ottawa giving it the autonomy to administer its child welfare.

Health Canada is encouraging Canadians to check their cupboards and kitchen tables as the agency has recalled more than 30 types of Indigo-branded items including ceramic mugs, mug ornaments and houseware products due to potential mould contamination.

Tom Brady retires, insisting this time it's for good

Tom Brady, who won a record seven Super Bowls for New England and Tampa, has announced his retirement.

'We're all Tyre': Family prepares to lay Nichols to rest

The family of Tyre Nichols plans to lay him to rest on Wednesday, three weeks after he died following a brutal beating by Memphis police after a traffic stop.

Las Vegas police on Tuesday arrested and raided the home of a former 'Dances With Wolves' actor turned alleged cult leader accused of sexually assaulting young Indigenous girls during a period spanning two decades, according to police records obtained by The Associated Press.