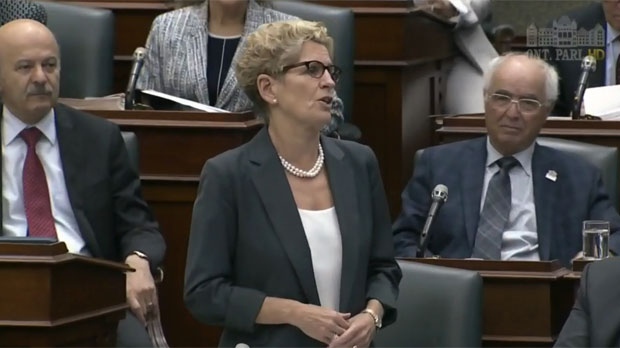 Ontario's Liberal government promised Wednesday to spend $2.1 billion over the next four years to rebuild the province's mental health system, but the opposition Tories say the commitment is only being made to help bolster the party's re-election bid.

"We have a good system," Wynne said. "But the fact is that too many people are struggling to navigate the system to find the care that they need, either because it's not there or because they don't have a way of navigating. Part of today's announcement is about ensuring that there is no wrong door to accessing mental health care."

It also calls for every secondary school in the province to have access to an additional mental health worker, creating approximately 400 new positions within two years.

"This announcement means that every high school will have access to an additional mental health worker and more mental health services on college and university campuses so that your son or daughter can get the help that they need if they're struggling with anxiety or an eating disorder," Wynne said.

The program would also increase access to publicly funded psychotherapy, including cognitive behavioural therapy, for up to 350,000 more people with mild to moderate anxiety or depression.

The announcement comes after a government throne speech Monday that promised a significant funding commitment for mental health in the provincial budget, which will be tabled on March 28.

Progressive Conservative legislator Lisa MacLeod, who has spoken publicly about her own mental health struggles, said government inaction has lead to long waits for mental health care across the province. With less than 80 days before the spring election, MacLeod said the timing of the announcement was questionable.

"The only thing they care about is re-election," MacLeod said. "Why, after 15 years, is this government only now committing to invest in mental health?"

In November, the Tories pledged to spend $1.9 billion on mental health under then-leader Patrick Brown, but it's not clear if his successor, Doug Ford, will include that promise in his campaign platform.