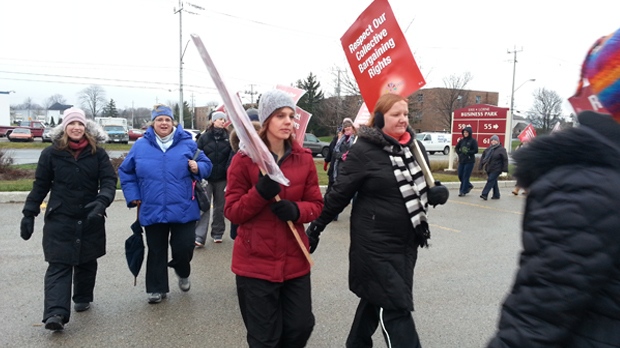 TORONTO -- The president of Ontario's elementary teachers' union says if there is no deal with the government in two weeks they will start more job action -- and he isn't ruling out a full strike.

Sam Hammond says he has now put the province "on notice" that if there is no contract agreement by March 6, the Elementary Teachers' Federation of Ontario will begin a new phase of strikes, though he isn't yet specifying what that will look like.

The elementary teachers and education workers have been engaging in rotating strikes, but Hammond says over the next two weeks his members will be focusing on political pressure and mobilizing support from the public.

Starting Wednesday, ETFO teachers will picket outside their schools for at least 20 minutes a day once a week, send letters to their provincial representatives and the minister of education, and encourage people they know who aren't teachers to do the same.

The teachers are also ramping up their work-to-rule campaign on Wednesday by not covering a class for an absent colleague if a supply teacher can't be found.

Meanwhile, Catholic teachers are back at the bargaining table today and because of the renewed talks they have suspended rotating strikes they had planned for this week.