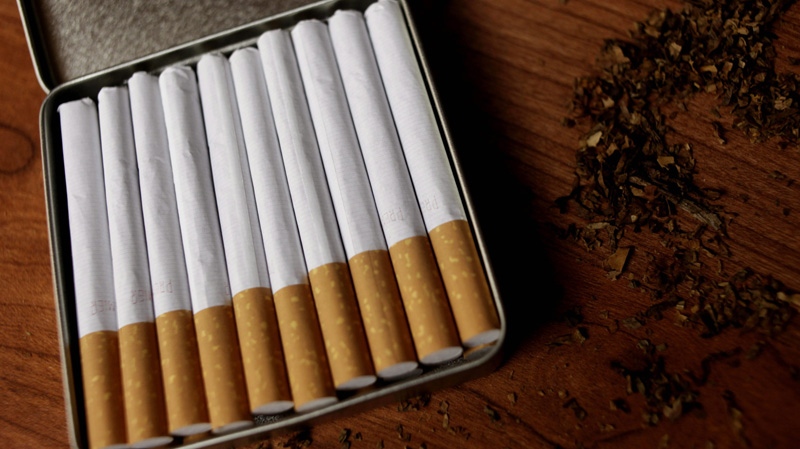 A new study suggests nearly a third of cigarettes sold in Ontario are purchased illegally.

The National Coalition Against Contraband Tobacco commissioned research that tracked the cigarette-buying habits of people in Ontario.

The study found 32 per cent of respondents purchased contraband cigarettes, a figure that the coalition says is the highest in the country.

They say contraband purchases are most common in northern Ontario, where more than half the respondents -- 51 per cent -- reported buying illegal cigarettes.

They say the province needs to implement stronger enforcement measures to clamp down on the trade, which they say supports organized crime.

The online poll surveyed 1,500 adult Ontario smokers over 12 weeks ending on December 10, 2016. The polling industry's professional body, the Marketing Research and Intelligence Association, says online surveys cannot be assigned a margin of error because they do not randomly sample the population.

The coalition -- an advocacy group formed with the participation of businesses, individuals and organizations that include the Canadian Convenience Stores Association, the Retail Council of Canada and the Canadian Tobacco Manufacturers Council -- said Ontario's contraband cigarette market has remained constant for years even as other provinces have taken action to curb the problem.

"There is no reason to accept high contraband tobacco rates as a given," Grant said in a statement. "Clearly, this is a problem that will not go away on its own. It is also clear that meaningful anti-contraband tobacco measures can reduce illegal cigarette incidence."

The coalition's figures align with those released by the Macdonald-Laurier Institute for Public Policy last year.

The think tank's study combed through a number of public data sources, including tax revenue and trade figures, and estimated that illegal sales made up about a third of Ontario's tobacco market.

Researcher Christian Leuprecht, who is also a professor at Queen's University, estimated those sales cost Ontario up to $1 billion in revenue annually, accounting for a third of the roughly $3 billion Canada as a whole loses to contraband sales.

The illegal trade in the province was even greater than Ontario's about 15 years ago, he said, adding that it has now fallen by 50 per cent while Ontario's has stayed put.

But he cautioned against over simplifying the issue, saying any solution would have to account for the province's legal tobacco growers and indigenous communities involved in the trade.

A spokesman for Ontario's finance ministry said the provincial government is committed to addressing contraband tobacco through "a balanced approach of partnerships and compliance activities," including the establishment of a contraband tobacco enforcement unit within the Ontario Provincial Police and an ongoing dialogue with First Nation communities on the self-regulation of tobacco on-reserve and revenue sharing.

The provincial police force and the RCMP did not immediately respond to requests for comment.

The National Coalition Against Contraband Tobacco said most of Canada's contraband smokes come from about 50 factories based primarily in Ontario and Quebec.

Ontario has also taken measures targeting smokers in the past, raising cigarette taxes by about $3 a carton in last year's provincial budget.

But the coalition has historically decried such an approach, saying higher prices drive people towards the black market and only fuel the problem.

An RCMP estimate suggests at least 175 organized crime groups dabble in the contraband tobacco trade and use proceeds to fund other enterprises such as drugs and human smuggling.