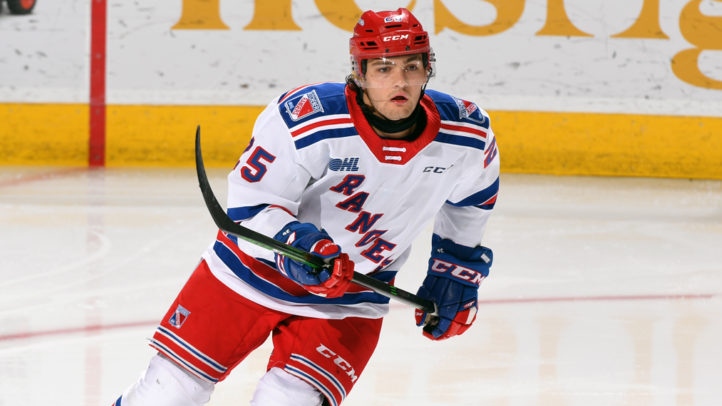 The Kitchener Rangers pulled the trigger on a pair of trades on Sunday, with the OHL's Jan. 10 trade deadline fast approaching.

DECLAN MCDONNELL TO THE BARRIE COLTS

The Rangers shipped forward Declan McDonnell and a pair of draft picks to the Barrie Colts in exchange for the rights to defenceman Hunter Brzustewicz and a trio of draft picks.

Kitchener receives a conditional second-round pick in 2023 along with a 2023 fourth-rounder and conditional third-round selection in 2025.

The Rangers sent conditional second-round and fourth-round picks in 2025 to the Colts.

"We wish Declan nothing but the best of luck in Barrie. This was an extremely difficult decision. Declan embodies what it means to be a Ranger and play Rangers hockey. We will miss him on and off the ice," Rangers GM and head coach Mike McKenzie said in a press release.

McDonnell was drafted by the Tampa Bay Lightning in the seventh round of the 2020 NHL Entry Draft.

In 27 games, the 19-year-old sat fourth in team scoring with 10 goals and 13 assists. His three game-winning goals are the most by any Ranger this season.

Brzustewicz has two goals and eight assists in 28 games with the U.S. National Under-18 Team.

The 17-year-old is committed to play the 2022-23 season in the NCAA with the University of Michigan.

Kitchener also acquired defenceman Jack Harper from the Guelph Storm on Sunday in exchange for a 2024 ninth-round pick.

The Guelph native was selected in the seventh-round of the 2018 OHL Draft by the Flint Firebirds before being traded to the Storm ahead of the 2021-22 campaign.

The 19-year-old posted five assists in 24 games with Guelph this season.

The Rangers third trade of the week came on Thursday.

The team dealt defenceman Arber Xhekaj to the Hamilton Bulldogs for forward Navrin Mutter and a haul of draft picks, including: