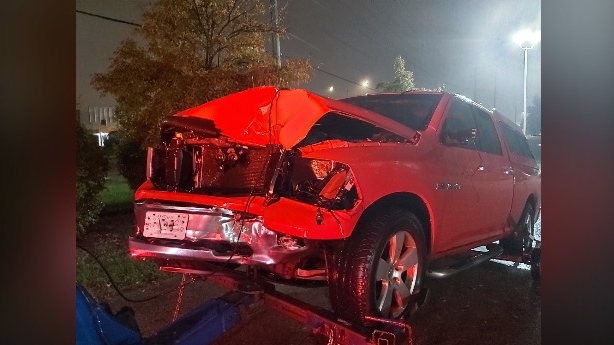 A man from Kitchener faces several charges, including impaired driving, after Ontario Provincial Police responded to a report of a ‘heavily damaged’ vehicle on Highway 7 on Saturday.

Cambridge OPP say they arrested and charged the 39-year-old with dangerous driving, impaired driving, failing to remain at the scene of a collision and possessing readily accessible alcohol.

The man also faces multiple charges for breaching the conditions of his G1 licence. The additional charges are driving without an accompanying driver, driving on a prohibited highway, driving at an unlawful hour and operating a vehicle with a blood alcohol level above zero.

The vehicle was impounded and the driver was issued a 90-day licence suspension.

A citizen reported a heavily damaged truck driving on Highway 7. #CambridgeOPP arrested a 39 year old male from Kitchener who is charged with:
•Dangerous Driving
•#ImpairedDriving and 80 plus
•Fail to remain at the scene of a collision
•Alcohol readily accessible
1of 2 pic.twitter.com/yLoqVWq75k