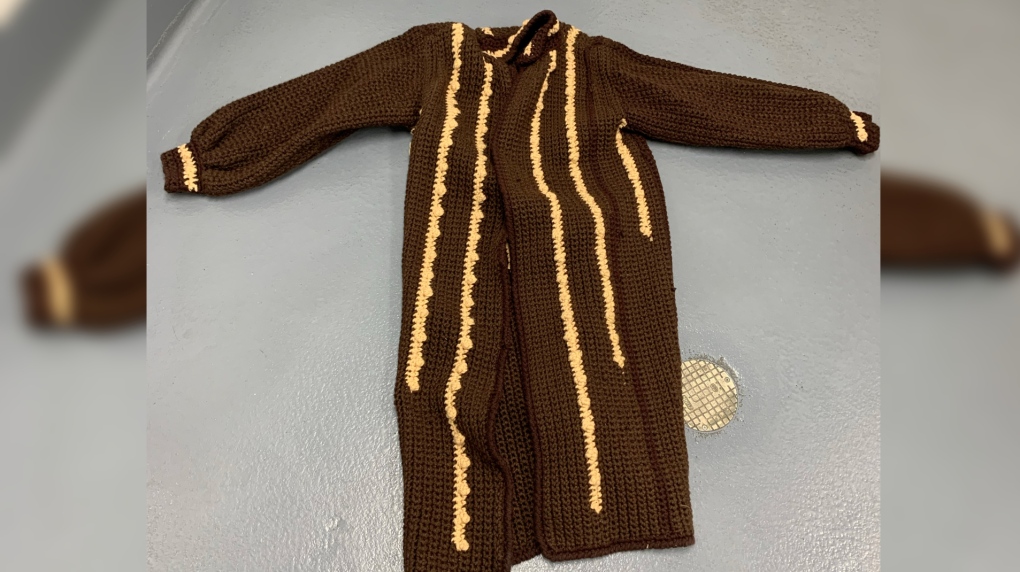 Guelph police are looking for the owner of this knitted coat which they believe is stolen. (Guelph Police Service)

A 45-year-old Guelph man has been arrested after an elderly woman was confronted by an armed intruder in her home Monday evening.

The man is now facing multiple charges and police are trying to find the owner the knit coat he was wearing at the time of his arrest.

Guelph police say at 8:38 p.m. on Monday, a man entered a home near Cambridge Street and Yorkshire Street North and confronted the homeowner.

“The victim was able to direct the male out of her home as he showed what appeared to be a black firearm inside his coat,” police said in a media release.

Officers located the man nearby. A black imitation firearm was found in his jacket pocket.

Police say at the time of his arrest, the man was wearing a knitted ¾ length coat investigators believe was stolen. Police have now posted a photo of the garment online and are asking anyone who recognizes it to contact them.

Canadian Actor Ryan Reynolds dropped by a Toronto college on Wednesday, surprising students in the midst of a school project.

A team of preteen Ukrainian refugees that have been scattered across Europe by war arrived Wednesday in Quebec City, where they'll get the chance to compete in a renowned hockey tournament.

Nearly a year since Russia's invasion of Ukraine, community organizers say there is still work to be done to help the thousands of Ukrainian refugees looking to start a new life in Canada while coping with the hardships they've faced coming here.

After a radioactive capsule went missing in Australia, could the same happen in Canada?

After a tiny radioactive capsule went missing in the Australian outback, an expert in Canada says the likelihood of the same happening in this country is unlikely, given our strong regulations governing the handling of radioactive materials.

As Black History Month gets underway, Canada Post has unveiled a new stamp honouring Chloe Cooley, a young Black woman who was known to challenge her enslavement in the late 18th century.