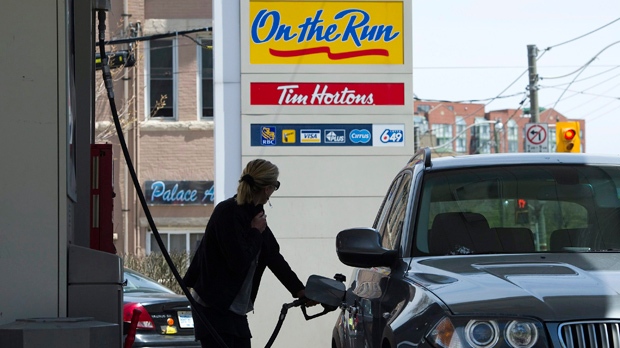 A woman pumps gas in Toronto in this file photo. (Nathan Denette / THE CANADIAN PRESS)

Rickford pointed to a Facebook post from the chief of staff for a federal Liberal MP, who boasted a milestone in ripping off the stickers.

"Tonight, I ripped off and destroyed my 100th of Doug Ford's propaganda stickers," the staffer wrote in a now-deleted post from Oct. 22. "Proud to do my part to push back on Ford's grotesque reign of incompetence."

Rickford said he thinks Liberals are embarrassed about the cost of the carbon tax.

The stickers show the federal carbon tax adding 4.4 cents per litre to the price of gas now, rising to 11 cents a litre in 2022. They do not include information about rebates available to residents.

The carbon tax is expected to cost a typical household $258 this year and $648 by 2022. Residents of provinces with the tax will be getting rebates on their income tax returns that start at $128 annually and increase for people with spouses or dependents at home.

Ford has previously commented on reports that the stickers were peeling off because they used the wrong adhesive, joking that his family label business should have produced the decals.

"They have to pull me off the ceiling when I hear they are coming off," the premier said last month. "It's like the shoemaker's daughter not getting shoes."

But Rickford said Tuesday there's no evidence that the stickers aren't sticking.

"The only problem that we've had with stickers are Liberal staffers actually peeling them off gas pumps," Rickford said in the legislature.

"There's no evidence to support that the stickers are not sticking," he added later.

The stickers have been criticized as forced speech by opposition politicians and Ontario's Chamber of Commerce -- and the Canadian Civil Liberties Association has launched a legal challenge.

Ontario is among several provinces challenging the constitutionality of the federal carbon tax in court, and though Ford said in August that voters would decide the fate of it, the government is pressing ahead.

"A minority government doesn't validate the carbon tax," he said.

The provincial government has earmarked $30 million for its fight against the carbon tax, which includes the legal case it is taking to the country's top court and the sticker campaign.

This story by the Canadian Press was first published Oct. 29, 2019.