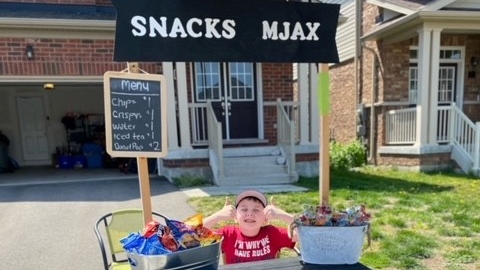 Jaxon Burne running his snack stand at the end of his driveway in Cambridge. (Credit: Morgan Wilson)

KITCHENER -- A seven-year-old Cambridge boy has started a snack stand in an effort to raise enough money for him to sponsor a service dog.

Jaxon Burne is selling all his snacks for $1 through his stand called SNACKS MJAX.

“Lots of people that came have been really nice,” he said.

Burne and his family raise service dogs for a year before the pups are ready to be paired with an owner.

“He actually wanted to be rich like Jeff Bezos, basically,” said his mom, Morgan Wilson. “We asked why he wanted to raise money. He said he wants to sponsor a service dog with National Service Dogs. And he wants a green kayak.”

Burne plans to have his stand open every other weekend this summer.