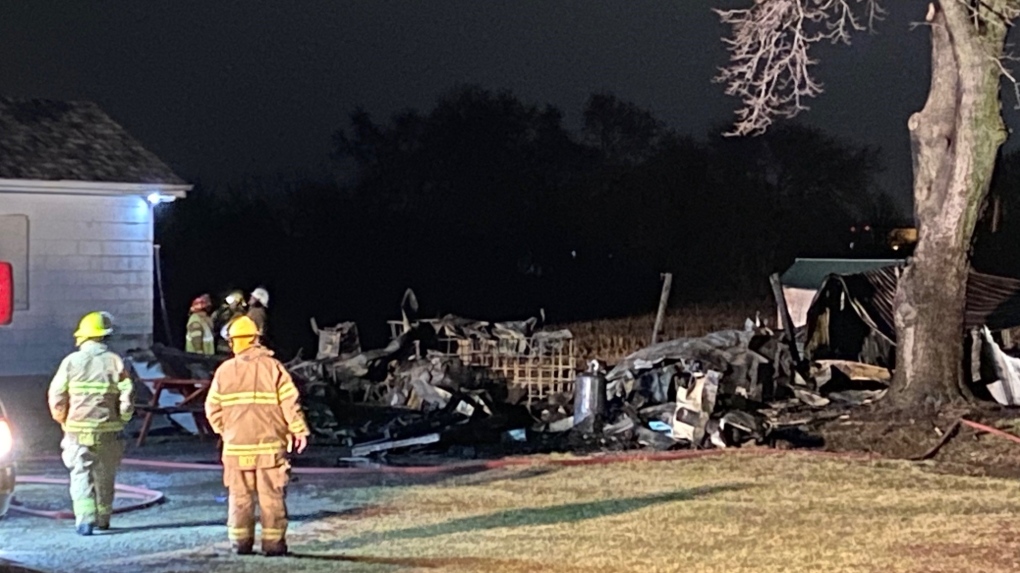 The fire reduced the garage to rubble. (Terry Kelly/CTV Kitchener)

Damage is estimated around $150,000 after flames tore through a garage in Brant County on Friday night.

Brant County firefighters were called to the property on Highway 24, west of Brantford, around 8:30 p.m. In total, 30 firefighters responded, the county said.

An official on-scene told CTV News, given the windy conditions, had the garage been any closer to the home and the wind stronger the house could have been affected as well.

There were no injuries and the fire is not considered suspicious, the county said.

After a string of violent attacks on public transit in Toronto and other cities, a new survey has found that nearly six in 10 public transit users in Canada say they feel less safe or somewhat less safe while commuting.

A Russian woman says she has been denied consular services by her country's embassy in Canada over claims her Facebook activity poses a security threat.

More than two years after downtown Beirut was levelled by an explosion, a Lebanese-Canadian family of a 3-year-old girl killed in the blast is still searching for answers. Watch W5's documentary 'The Explosion' on CTV at 7 p.m.

Provincial and territorial finance ministers to meet in Toronto

Deputy Prime Minister and Finance Minister Chrystia Freeland is hosting an in-person meeting today with the provincial and territorial finance ministers in Toronto.

A new survey conducted by Research Co. reveals that more people in Western Canada now support a change in the federal government compared to a similar poll from June.