Kitchener's statue of Queen Victoria has been splattered with red paint several times over the past year, and on the holiday marking her reign, calls continue to have the controversial monument removed.

The community dialogue has been focused on the experiences, and voices, of the local Indigenous communities who have been harmed by colonialism.

"We're idolizing these colonial figures that built this country off of the backs and blood of Indigenous people and black folks as well," said Amy Smoke, the co-founder of Land Back Camp and a member of Mohawk Nation, Turtle Clan from the Six Nations of the Grand River. "To idolize them, we have to be sharing both sides of the history."

The city installed signage at the bottom of the statue in September 2021 that acknowledged how its presence in Victoria Park may continue to contribute to the ongoing harm caused by colonialism. They said the signage is one small step as they work toward authentic and lasting reconciliation.

The Queen Victoria statue has been vandalized three times in the last year. The latest incident coincided with the National Day of Awareness for Missing and Murdered Indigenous Women and Girls on May 5. 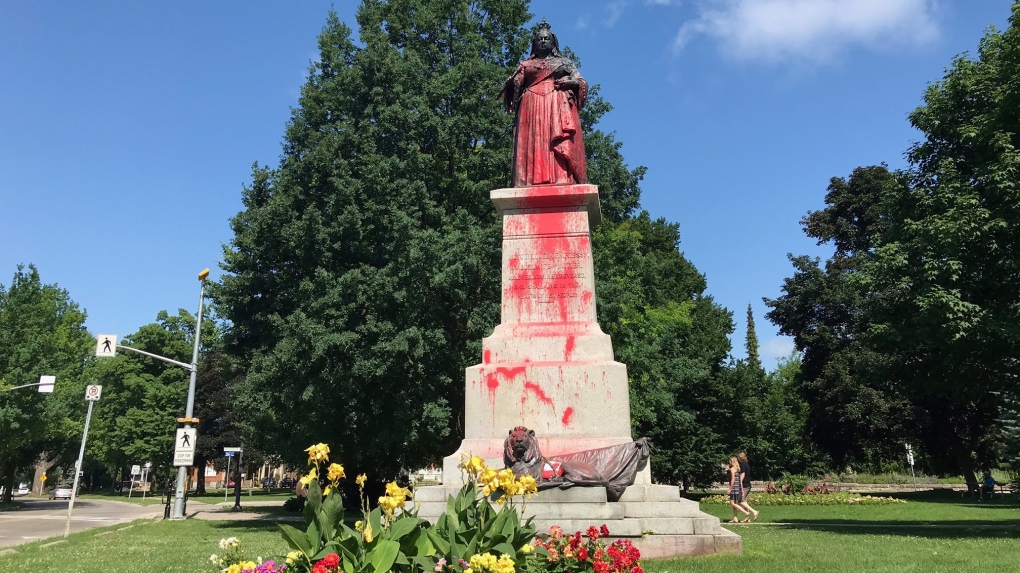 The city initially said it would not remove the paint "for the time being," but 11 days later the paint was gone.

"The city recognizes there is a need to include Indigenous stories, culture and contributions in our public spaces and to emphasize the voices of those who have been harmed by colonialism in the decision-making processes moving forward," read part of the city's statement that was sent to CTV News.

According to the city, in the coming months citizens will have an opportunity to provide feedback about the Queen Victoria statue.

"Staff will be bringing a report to committee on June 8 and to council on June 20, looking to continue a community dialogue about the statue," a spokesperson said.

The city said the dialogue will emphasize voices of the local Indigenous communities and will include education as a foundational component.

CTV News spoke to people at the park on Victoria Day, who had mixed feelings about the statue.

"I don't think that there's one kind of obvious answer to what should be done," said Caitlin Troughton. "I think if it's kept, it should be an opportunity for education."

"The queen is the monarch, and we named it Victoria Park for a reason, right? So it's named after her and I think it's lovely to have the statue here," Heather Brethard said.

"I think it should stay," said Alberto Mendoza. "I think it's a beautiful statue and it's a part of Canadian history."

"I do think that there's a lot of education that people need to take into account when it comes to why the statue is here, and what it represents," said Michelle Williams. "I also think you need to take into account how the people feel about it. So I know it was mentioned that it was covered in paint a few times this year. Maybe that's a cause for some more critical thinking as to whether or not we need it here."

"We're not pan-Indian. We all have very different perspectives. But I think you'll see that none of us were consulted really fully in all of these processes,” Smoke said.

City staff say it cost around $5,000 to clean the statue the last time it was doused in paint.

By-law and security staff were also patrolling the area over the weekend.

Many Canadians remain unaware of the involvement of forced child labour in the products they buy, according to non-profit agency World Vision Canada.

Hundreds of protesters descended on the U.S. Supreme Court on Saturday to denounce the justice's decision to overturn the half-century-old Roe v. Wade precedent that recognized women's constitutional right to abortion.

Prime Minister Justin Trudeau headed to the G7 summit in Germany on Saturday without a consensus from the Commonwealth to condemn the Russian invasion of Ukraine, but with a chorus of countries calling for help to overcome the fallout of the war.

WHO panel: Monkeypox not a global emergency 'at this stage'

The World Health Organization said the escalating monkeypox outbreak in nearly 50 countries should be closely monitored but does not warrant being declared a global health emergency.

After the Supreme Court overturned Roe v. Wade on Friday, holding that there is no longer a federal constitutional right to an abortion, protesters and supporters of the ruling gathered at the high court's building in Washington, D.C., and in other cities nationwide.

Ukraine's largest LGBTQ rights event, KyivPride, is going ahead on Saturday. But not on its native streets and not as a celebration.

Norway shaken by attack that kills 2 during Pride festival