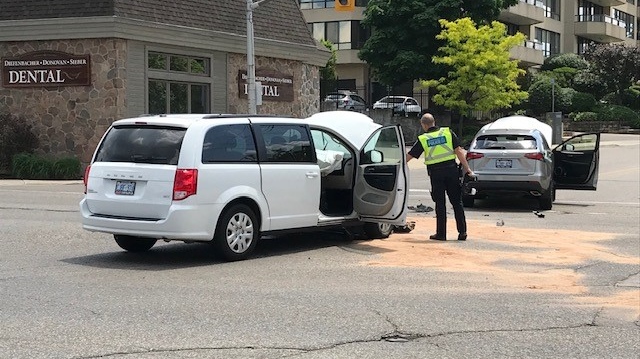 An unmarked Waterloo Regional Police (white van) and an SUV have been involved in a crash at a Kitchener intersection. (Dave Pettitt/CTV Kitchener)

WATERLOO -- An unmarked Waterloo Regional Police van has been involved in a two-vehicle crash at a Kitchener intersection.

Police were called to the incident around 12:30 p.m. on Friday at Victoria Street North and Lancaster Street West.

The driver of the WRPS White Dodge Caravan was heading west on Victoria when it collided with an SUV heading south on Lancaster, according to officials.

The intersection was closed for about two and a half hours for an investigation.

Any witnesses to the crash are encouraged to contact Waterloo Regional Police.