Symbols of the LGBTQ2S+ community are being targeted by vandals in southwestern Ontario.

Provincial police are investigating reports of damaged flags and other items meant to celebrate diversity and inclusivity during Pride Month.

Many of those incidents happened at schools.

OPP in both Wellington County and Perth County said they've received a "rash of mischief reports" in Mapleton, North Perth and Minto.

On June 4, someone damaged Pride ribbons decorating a light standard on Main Street in Palmerston. 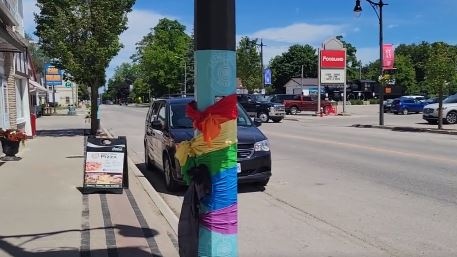 Pride ribbons around a light standard, photo taken from an OPP video.

Then two reports were made in Listowel on June 12. Police said Pride flags were damaged at a business on Mitchell Street South and at Listowel District Secondary School, which is part of the Avon Maitland District School Board.

"We are disappointed to report that our Pride Flag was torn from our flag pole last night," the school tweeted on Monday morning. "Video footage was captured and an investigation is underway. We will be reinstalling the flag as soon as possible."

The Avon Maitland District School Board also tweeted its reaction to the vandalism.

"Such disappointing news," the board said. "This act of hate and intolerance is unacceptable and those involved will be held responsible. We are committed to fostering a learning environment that celebrates, supports, respects, values, and embraces all forms of diversity." 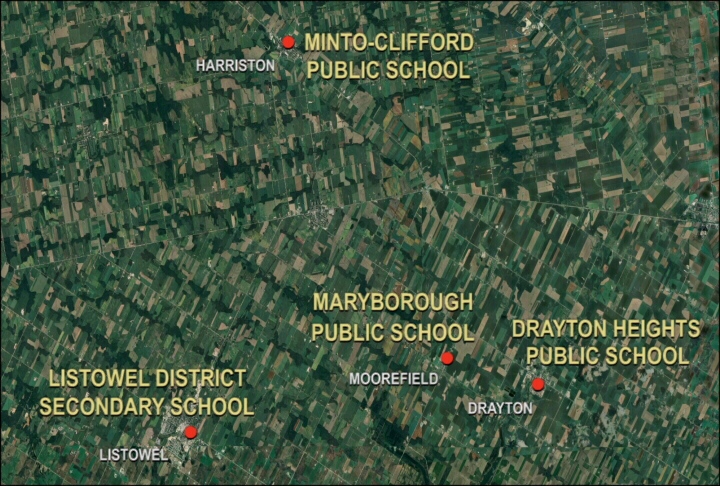 A map shows the locations of schools where Pride flags have recently been vandalized. (Graphic by: Steve Woodford/CTV Kitchener)

"It was very clear that this was a vandalism - an act of hate - that was targeted towards our 2LGBTQ+ communities," said Brent McDonald, the UGDSB's executive superintendent.

He added that the flags were replaced before students got to school.

"iI was very important for us to put together a strong signal, together, that our schools remain a safe place... for our staff and students who attend," McDonald said.

Staff at Drayton Heights Public School were also prepared to talk to students about the incident.

"We're willing to have those conversations to help children understand the importance of the flag, and to create space for anyone who may have been harmed by this act of hate," said Principal Shannon Spike.

"It shouldn't be happening, it's wrong," Grade 6 student Rylea Brace told CTV News. "We should just support each other."

OPP said Pride ribbons on light standards in both Palmerston and Harriston were also damaged on June 13.

They released surveillance video on Tuesday, showing someone climbing a pole and grabbing the flag.

In the video, Cst. Joshua Cunningham called it one of many "senseless acts."

"We're going to follow the evidence that's presented to us," said Cst. Cunningham. "If they are linked, the connected individual will be charged. If they're not, that may lead to multiple investigations."

These aren't the only incidents targeting symbols of the LGBTQ2S+ community that have been reported over the last month in southwestern Ontario.

On May 29, someone threw paint on the Pride crosswalk in Ingersoll. Oxford County OPP shared security video of the incident in hopes someone could identify the vandal. Oxford County Pride said they were "saddened and disappointed" by the act, but would "not respond to threats or bullying as a Pride community."

In Norwich, multiple Pride flags were also stolen or vandalized between May 20 and May 24. OPP later said a 16-year-old had been charged with two counts of theft under $5,000 and they were also trying to identify others who may have been involved.

In response to those thefts, Oxford County Pride said they had received almost $1,000 in donations to replace the flags.

A new study by climate scientists suggests some 'hot spot regions' around the world contain ecosystems that are at-risk due to water availability.