Trudeau says time for blockades to end, Indigenous leaders to work with government 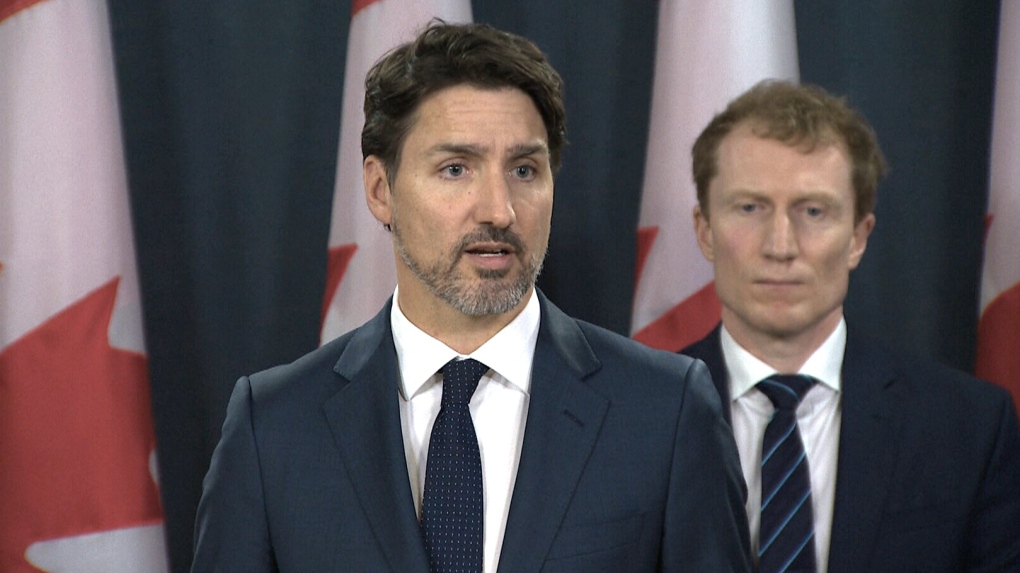 OTTAWA -- Prime Minister Justin Trudeau says after two weeks, barricades on rail lines and other major transportation routes have to come down.

He said injunctions to clear tracks must be obeyed and the law must be upheld, and there's no point making the same overtures to Indigenous leaders if they aren't accepted.

"We are waiting for Indigenous leadership to show that it understands," he said in an Ottawa news conference. "The onus is on them."

The blockades, particularly one on a critical east-west rail line in Ontario, are responses by Indigenous people and supporters to a move by the RCMP to clear protesters who had been blocking access to a worksite for a major natural-gas pipeline project in British Columbia. Hereditary chiefs of the Wet'suwet'en Nation oppose the work on their traditional territory, despite support from elected band councils along the pipeline route.

"Let us be clear: all Canadians are paying the price. Some people can't get to work, others have lost their jobs," Trudeau said. "Essential goodscannot get where they need to go."

The situation "is unacceptable and untenable," he said.

And Trudeau distinguished between protests over deep, long-standing, historic injustices and opposition to current policy decisions. One deserves more deference and patience than the other, he said.

Trudeau is contending with pressure from several premiers after they had a collective telephone call with him Thursday evening.

"We've sent a message clearly with our willingness to say, quite publicly, that we don't believe it's in the best interests of protesters or the general public to stand back in respect of the laws being broken, that it can endanger people's lives and endanger their well-being," Manitoba's Brian Pallister said Friday.

Alberta's Jason Kenney, a former federal Conservative cabinet minister, was sharper in an appearance of his own. He said he made it clear to the prime minister on the conference call with the other premiers that the blockades are having devastating impacts on people across the country.

He said it is scaring away investment and giving the impression that Canada can't operate as a modern democratic country.

Kenney said the prime minister told the premiers that the government's "patience is wearing thin" and that he believes that action is required "within hours and not days."

Meanwhile, a group of hereditary leaders from the Wet'suwet'en Nation in British Columbia is spending the day with Mohawk supporters in Ontario.

The B.C. hereditary chiefs are thanking the Mohawks for supporting them by blocking that rail line between Toronto and Montreal.

A notice telling police and reporters to stay away says the gathering is to celebrate friendship, healing, peace and optimism, and to talk politics.

The chiefs have scheduled their own news conference at the blockade near Bellevill., Friday afternoon.

The hereditary Wet'suwet'en leaders say they're willing to talk with representatives of the Crown, but only after the RCMP and Coastal GasLink workers have left their traditional lands.

On Thursday, the RCMP in B.C. sent a letter to the traditional leaders of the Wet'suwet'en Nation, telling them the force intends to move its officers out of the territory and station them instead in the nearby town of Houston.

Public Safety Minister Bill Blair said he believes this move meets the original conditions set by the Wet'suwet'en hereditary chiefs and that the time has come for the barricades to come down.

Trudeau has been under increasing pressure to end the blockades, with Conservatives calling for the government to use force, while the Liberal government insists peaceful negotiations are the only way to a lasting solution.

Canada's premiers are among those pressing for a swift resolution, including Quebec Premier Francois Legault, who said Thursday provincial police in Quebec would dismantle a blockade in a suburb south of Montreal as soon as an injunction was granted.

Canadian National Railway received a court injunction to end the blockade in St-Lambert Thursday, but so far police have not moved in.

An account of the conversation with the premiers from Trudeau's office stressed his recognition of the need to restore rail service across the country and that the federal government is looking at all options to resolve the current interruptions given the impact on the economy.

Trudeau called it a "complex issue" on which he working closely with B.C. Premier John Horgan. He also noted his hope that the RCMP's offer to withdraw from the traditional territory in B.C. will lead to a meeting between Crown-Indigenous Relations Minister Carolyn Bennett and the Wet'suwet'en hereditary chiefs to address both urgent and longer-term issues.

Horgan struck a more understanding note than some of the other premiers Friday. He said his government continues to be ready to engage in talks with Wet'suwet'en hereditary chiefs.

He acknowledged it's a "challenge" to have a dialogue with chiefs who have refused to meet with federal or provincial cabinet ministers unless the RCMP and Coastal GasLink withdraw entirely from their traditional territories.

But Horgan said more people from the community, other than the hereditary chiefs, have begun to speak out, including the matriarchs who have historically been the keepers of the traditional practices of the Wet'suwet'en people.

Horgan said he expects Na'moks, a hereditary chief who also goes by John Ridsdale, will be hearing from people in the community about his refusal to meet with the province, because that's "not how you have respectful dialogue with your neighbours."

He said he believes the vast majority of northern B.C. residents and Wet'suwet'en people want to find a way forward and his government remains "at the ready" to help reach that outcome.

This report by The Canadian Press was first published Feb. 21, 2020.

--With files from Steve Lambert in Winnipeg, Bill Graveland in Calgary and Laura Kane in Vancouver