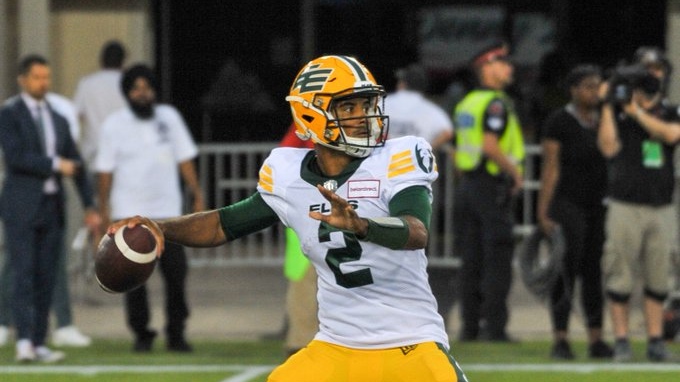 Tre Ford, the former University of Waterloo football star, made history at the Edmonton Elks game on Friday night.

The 24-year-old rookie not only made his first career start in the CFL, but he's also the first Canadian quarterback to start for the Elks since 1968.

The Elks trailed the Hamilton Tiger-Cats by 13 points early in the second half of the game, but Edmonton came back to beat the hometown team 29-25.

Ford, who grew up in Niagara Falls, had a lot of support in the crowd. His family, friends and former University of Waterloo teammates and coaches were in the stands to cheer him on.

"To come back to Hamilton and have all my family watching me get that first start and that first win has been fantastic," he said."I have room for improvement. I’m not going to complain because we did win. But I’m going to hit the film room to see what I can critique and where I can get better."

Ford rushed 61 yards on six carries Friday night, and completed 15 of 26 passes for 159 yards and a touchdown.

Chris Bertoia was Ford's former football coach at the University of Waterloo and was at Friday night's game in Hamilton. He told CTV News that it's rare to see a Canadian quarterback get a chance to start so early in his career.

Ford was the first player in the school's history to win the Hec Crighton Trophy which is awarded to the most outstanding Canadian university football player.

He was picked eighth overall by the Elks in the 2022 CFL draft.

Ford's twin brother Tyrell, who is also a former Waterloo Warrior, was chosen 13th overall by the Winnipeg Blue Bombers.

-- With files from The Canadian Press

The Canadian Border Services Agency is temporarily allowing fully vaccinated travellers a one-time exemption to not be penalized if they were unaware of the health documents required through ArriveCan.

The man accused in the stabbing attack on Salman Rushdie pleaded not guilty Saturday to attempted murder and assault charges in what a prosecutor called a 'preplanned' crime, as the renowned author of 'The Satanic Verses' remained hospitalized with serious injuries.

Canadian writers, publishers and literary figures doubled down on the right to freedom of thought and expression on Saturday, one day after an attack on award-winning author Salman Rushdie that left him hospitalized and on a ventilator.

Lightning has sparked more than 100 new wildfires in British Columbia since Wednesday, as thunderstorms rolled through the provincial Interior.

Canadian Blood Services says it is in talks with companies that pay donors for plasma as it faces a decrease in collections.