'They smashed through our front door': Aberfoyle business uneasy after dramatic break-in caught on camera

'They smashed through our front door': Aberfoyle business uneasy after dramatic break-in caught on camera

Staff at Aberfoyle Powersports were left to pick up the pieces after they say a truck drove through the front doors of their store on Wednesday.

The dramatic security footage caputred by the store shows what appears to be a truck driving into the store.

“They smashed through our front door, both doors, with a pick-up truck, smashed into a post, did a lot of damage in our showroom,” Darryl Leachman, the general managerof Aberfoyle Powersports said.

The video shows three people getting out of the vehicle and shoving items from the store into the back of the truck.

“I'm pretty sure they broke most of the stuff they took with them because they were just throwing it in like crazy,” said another staff member, Rachael Silverthorn-Leachman.

She said the incident had her feeling uneasy.

“You feel hurt, you feel someone has taken a piece of you,” she said.

Staff said the people in the video were in and out within less than two minutes.

According to Ontario Provincial Police (OPP), the truck used to break the doors had been reported stolen from Guelph and later located.

“That vehicle then was located not too far away, abandoned, without any equipment and had been set on fire,” said Const. Joshua Cunningham from Wellington County OPP.

Police are looking for a second vehicle, a silver GMC pick-up. It was last seen travelling on Highway 6, also known as Brock Road South.

Police are asking anyone who may have seen it or captured dashcam footage to come forward.

“If they see a silver GMC pick-up truck or two vehicles driving in tandem, maybe slower or not typically driving behaviours, to please let us know,” said Cunningham.

OPP are looking for three men in connection to the incident. One man is said to be wearing a red camo jacket and blue pants. Another man was wearing dark clothing with green gloves and a hoodie. The third man was wearing a dark grey jacket, dark toque and a dark face mask. 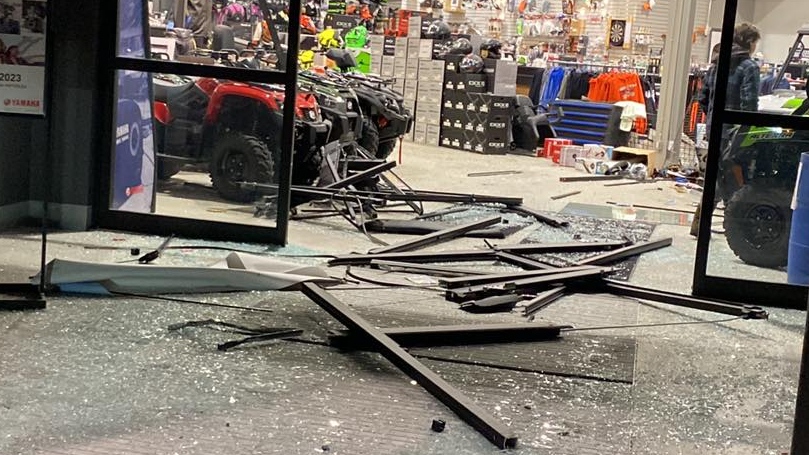 Staff are securing their broken front doors and have been directing customers to use another entrance.

The general manager thinks the stolen merchandise will make its way to a resale website and is asking the public to keep an eye out.