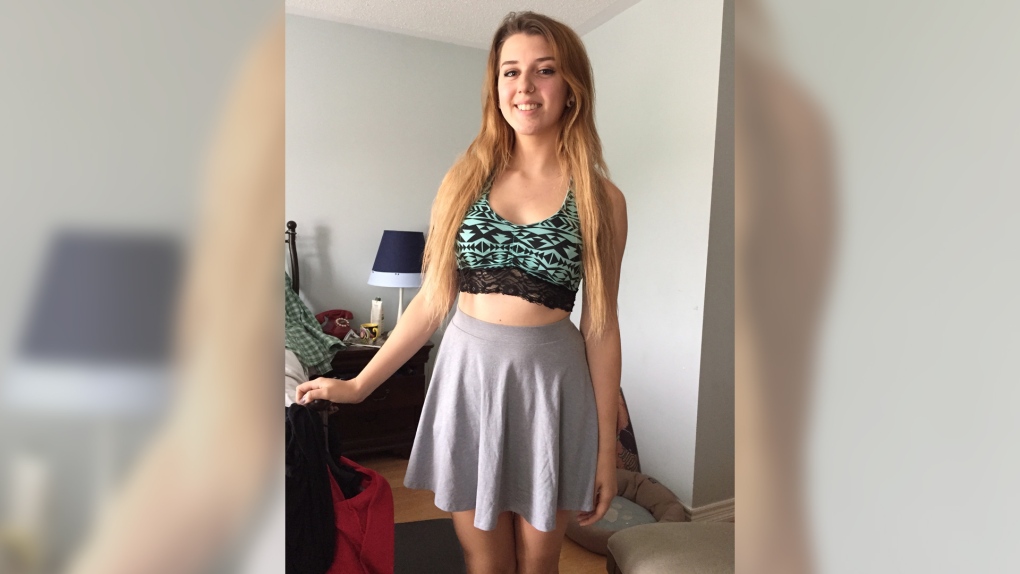 Alexi Halket poses in a crop top shirt in Etobicoke, Ont., in this Monday, May 25, 2015, handout photo. (Sandra Halket / THE CANADIAN PRESS)

TORONTO -- Students may have been rebelling against school-imposed dress codes for decades, but observers say the fact that those protests are now making national headlines suggests a fundamental shift in social attitudes.

Social media has allowed students both to share their own experiences with a wider audience and read about similar occurrences from further afield.

The result, experts say, is that individual incidents become part of an ongoing, global conversation about complex issues such as freedom of expression, cultural identity and sexual consent.

All of these topics can be tied back to dress codes according to Rebecca Raby, a sociologist in Brock University's department of Child and Youth Studies.

According to her research, which specifically explored the impact of clothing rules in secondary schools, placing limits on people's attire sends subtle messages about what's acceptable in society.

"There's lots going on when you have a dress code," Raby said in a telephone interview. "Dress is very subjective, ...and when schools try to regulate it, they're trying to regulate dress of really diverse populations, including diverse ages, who have different kinds of norms. And they're trying to enforce one norm."

Earlier this month, Lauren Wiggins made a splash on Facebook by posting a picture of a floor-length halter dress that got her briefly suspended from her Moncton, N.B., high school on grounds that it posed a "sexual distraction." Earlier this week, Alexi Halket made headlines by organizing a protest against perceived fashion rules at her Toronto-area arts school.

After being told the crop top she wore was too short and looked too much like a sports bra, Halket took to social media and mobilized dozens of fellow students to don similar garments the next day.

Halket's principal, Rob MacKinnon, acknowledged that dress codes can be a complex issue. Schools usually develop their own sartorial standards that reflect the community they serve, he said, adding that what might raise eyebrows in one region may elicit a shrug in another.

But MacKinnon said schools are also responsible for teaching some basic standards of behaviour.

"Our (school) is a workplace, it's not a public street," MacKinnon said. "I think, like all work places, there is an understanding that we don't come to school in our underwear."

Raby praised MacKinnon for openly discussing the issue with his students, but cautioned that tying a dress code to social standards isn't always innocuous.

"Just saying something like, 'the school is a place of business,' or 'you should come to school as if you're going to work' assumes a certain kind of workplace in these people's futures," she said.

"There's this underlying story, and it fits with this sort of rape culture idea that girls are responsible, through what they wear, for managing boys, which is also quite often negatively framed that guys can't control themselves."

Raby said it's not unusual for teens to push back against rules imposed at school, but sometimes vocal resistance becomes a harbinger of social change.

She senses another shift in the offing as teens find new ways to get their voices heard.

Gender analyst Steph Guthrie agreed, saying social media allows people feeling marginalized to express themselves while learning about others in the same situation.

She said girls would have had opportunities to read about everything from the disgraced CBC Radio host Jian Ghomeshi scandal to in-depth discussions of rape culture on university campuses.

That information provides a context for dress code dustups that ultimately help fuel a global conversation, she said.

"We are better able to map these incidents and see these are all different, but they all share some common themes," she said. "I think it's helping to map a movement."