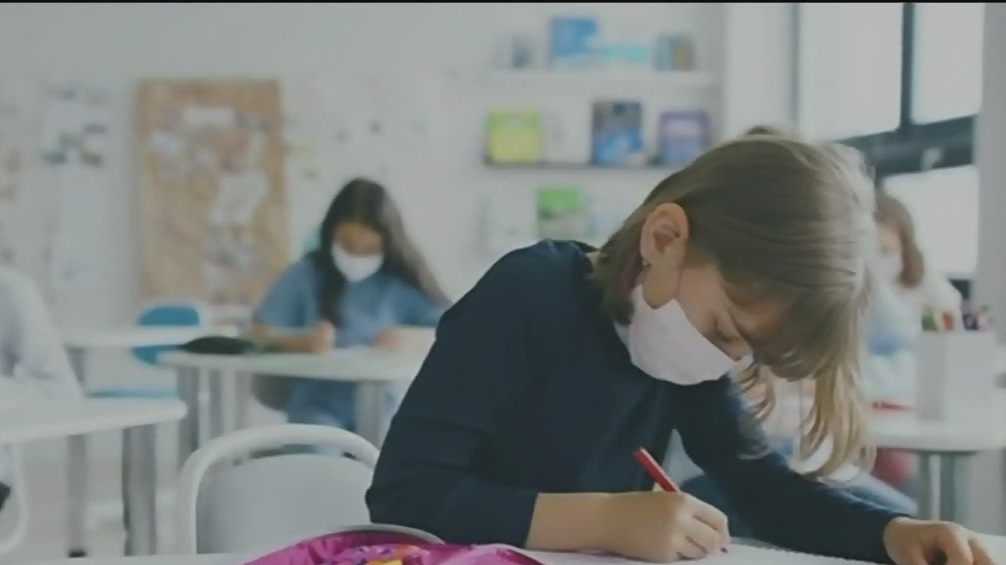 KITCHENER -- Sending children back to school in Ontario will likely have a large effect on the number of COVID-19 cases in the province, according to a company forecasting how the virus spreads.

Scarsin has been forecasting diseases for decades and researchers enhanced their current model in order to gather data and forecast the spread of the novel coronavirus.

"We took the platform, which allows us to load data and do all that, and we created a very customized solution for COVID," said CEO Paul Minshull.

He said the forecasting groups people into demographics like age group and where they live, which could help guide decision-making on reopening schools.

"How much does this cause infection, how much does it spread infection?" he said. "The answer is that depends on what region you live in."

"That's very powerful because Waterloo and Wellington-Dufferin are not like Peel or Toronto."

"The more dense your health region is, the more risk you have in terms of spread," he said.

Minshull said the return to school provides a higher risk for COVID-19 spread because there will be a lot of students in a confined indoor space.

"Sitting in classrooms is, by its very nature, a very challenging environment," he said.

As the weather gets colder, Minshull said ventilation will likely worsen, increasing the risk of COVID-19 spread.

Minshull said physical distancing and hand hygiene have a large role to play in stopping the spread of the virus in schools. Masks will also help control the spread.

Many school boards in Waterloo Region and Wellington County have elected to delay and stagger the beginning of the school year. Minshull said avoidance strategies like this could help control the spread of the virus by limiting contacts between students. Cancelling extra-curricular activities and keeping teachers with one cohort as much as possible can also help limit contacts.

"Are you going to prevent (COVID-19)? No, you're still going to have it," Minshull said. "You're just going to minimize it as much as possible."

Despite the provincial economy slowly opening up over the past few months, Minshull said the return to school could have a dramatic effect on the pandemic.

"Schools are a game changer," he said. "You're opening up tens of millions of daily contacts, because every child and every person has seven to 15 kind of infectious potential contacts in a day. So, you're just turning on this massive contact machine that hasn't been here."

Both the provincial government and Region of Waterloo Public Health officials have said COVID-19 cases and outbreaks are all but inevitable as students head back to the classroom.

Speaking to reporters on Monday, Premier Doug Ford said there's a possibility an outbreak could occur as early as the first day of school.

Ford also said school shut downs are a possibility if the virus starts to spread.

“If it really starts taking off, I will not hesitate for a second to close schools down,” Ford said at a news conference on Monday. “In the blink of an eye, they’re down, they’re done. Bang. Closed.”

Last week, the province defined an outbreak as two or more lab-confirmed cases of COVID-19 in students or staff with an epidemiological link between them.

Dr. Hsiu Li Wang, Waterloo Region's Medical Officer of Health, said Tuesday that public health's involvement will begin as soon as one COVID-19 case is identified in a school.

"As soon as there's a case, there's public health action," she said. "Right away we do case and contact follow up."

She said there's a strong possibility that a class would be dismissed if there was a positive case.

Dr. Wang said shutting down schools is a "possibility," especially if there is evidence of uncontrolled transmission of the virus.

"It would have to mean that very significant efforts that we would make to try to address outbreaks as they occur," she said.

Minshull said all forecasting points to a second wave of the novel coronavirus this fall.

"The mathematical probability is there's absolutely going to be wave two," he said. "The question is, which regions, how soon, and how big, and does it become big enough to overwhelm the tracking and tracing?"

Minshull said an increase in reported cases is only part of the picture when it comes to the virus.

"Any number you have is always an understatement of what's really going on," he said. "So if somebody says hey there's 100 cases here in this region, like no it's not 100, it's hundreds."

Dr. Wang said it usually takes two to four weeks to see case numbers change -- and potentially increase -- from things like businesses reopening. So, it may take several weeks to see the true effect of students returning to schools.

"We will see increasing numbers of cases," she said Tuesday. "That said, what we are striving for is to minimize the number of cases as much as we can. And, of course, minimize severe outcomes from cases."

With files from CTVNewsToronto.ca