These back-to-school activities are considered high risk. An infectious disease expert weighs in on how to fix them

KITCHENER -- A return to school amid the COVID-19 pandemic will look much different after the Ontario government issued a number of measures aimed at keeping students safe as they return to class.

From mandatory masks to staggered entry times, school boards have been using government recommendations and advice from public health officials to craft their own back-to-school strategies. But is it enough?

"Anything that allows people to be closer to one another in areas that are not well-ventilated and allows a great number of people to be together for a sustained period of time, any combination of those things is going to increase the risk of acquiring COVID-19," he told CTV Kitchener in an interview on Monday.

Sharkawy said activities like riding a school bus or eating in a classroom rank as high-risk. Others, like carpooling or sitting at a desk, rank as medium-risk activities.

These are all things that will be going ahead as normal in Waterloo region's public and Catholic schools come September.

Here are some things that Waterloo Region's schools could do to make those activities less risky. 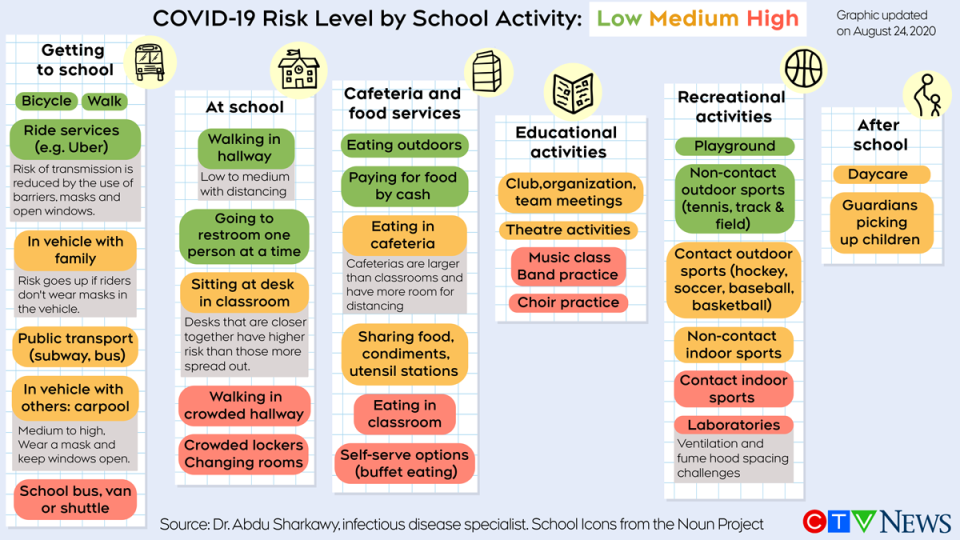 While taking a city bus ranks as a medium-risk activity, Sharkawy said that having up to 70 students on a school bus makes him "worry a great deal."

"The simple fact is that masks are only one part of the risk mitigation strategy here, and we know that distancing is much, much more important," he said.

"If you're packing 70 kids onto a bus, distancing is practically impossible."

He also said that school buses tend not to be that well-ventilated, and that an alternative like opening all the windows won't suffice in the winter.

Only secondary students at Waterloo region's public and Catholic school boards will be bussed at reduced numbers. Elementary students, on the other hand, will ride at normal capacity with up to three students per seat.

A spokesperson for Student Transportation Services of Waterloo Region said that its plan has been reviewed by Region of Waterloo Public Health and is in line with provincial and federal guidelines.

Finances, the number of drivers and class times are all obstacles, Benoit Bourgault said.

Another option, Sharkawy said, is carpooling. While it ranks as a medium-risk on his chart, he said that carpooling is a place where we can "employ a little bit of creativity."

"So it might actually make sense, if the children are part of the same cohort for example, within their classroom, it stands to reason that it may be perfectly logical and relatively safe for those children to carpool together," he said.

He noted that students carpooling from outside of their own household should wear a mask while they're in the vehicle.

Sitting at a desk: Medium risk

While sitting at a desk is a medium risk, Sharkawy said that most classrooms aren't designed for practical physical distancing.

That's still the case if classes were down to around 15 students, something that high school students at the public and Catholic school boards alike will experience.

"This is an area that's going to generate a lot of concern," Sharkawy said.

"I don't know if there's an easy solution to it and I think it begs the idea of wanting to do outside-of-classroom learning whenever possible, whether it's outdoors while the weather allows or using other spaces within the community."

He says vacant buildings, churches and community centres could all be safer alternatives for learning as opposed to the traditional classroom setting.

But the Waterloo Region District School Board said that, after surveying parents, students and staff, the indication was that a suitable learning environment was a top priority.

"Community centres, churches and outdoor spaces will not provide the learning environment that a classroom setting does, and does not offer a long-term solution," said spokesperson Alana Russell.

She also said that expanding classes into community spaces would have meant challenges associated with supervision, validation of HVAC systems and transportation.

Sharkawy said that eating lunch in a classroom is a high risk activity because students won't be able to wear masks while they eat. That, combined with the fact that physical distancing is so challenging, makes classroom lunches a dangerous prospect in his eyes.

He said that staggering times at which smaller cohorts could eat in a larger space like a cafeteria or gym could present a safer option because it cuts down on the time of exposure.

"Clearly you don't want the entire school eating at the same time in a larger space, because then you are essentially eroding the benefits of being in that bigger space to begin with," Sharkawy said.

"But if there is way to schedule, perhaps, 20 minutes for eating within a cafeteria or a gym and the remainder of time to be spent elsewhere, ideally outdoors, to me that would make a lot more sense in terms of reducing the risk than actually keeping everyone unmasked in a smaller classroom environment for a period of potentially an hour."

He admitted that it is not the easiest problem to fix, but that it is worth looking at alternatives.

"That, to me, is obviously fraught with risk. I realize it's not so practical to do something else but I also think it's not impossible to think of other strategies."

Russell said that the school board has taken direction from public health officials on this.

"Our priority will be limiting contact points between students and containing class cohorts within their own space," she said.

As for the Catholic school board, its Director of Education, Loretta Notten, said that elementary school students will be allowed to eat outdoors if their teacher or supervisor is open to the idea.

The board has also eliminated lunch breaks altogether for secondary students.

"Our secondary model has prioritized health and safety and our students will not have any lunch breaks.  They have a 150-minute morning class and then they leave to go home, where they will eat lunch and then access their afternoon class synchronously," she said in an email.

Schools across the province will start receiving students on Sept. 8, with some offering staggered starts for the first week. It'll be the first time students return to class since schools were closed due to the pandemic after March break.