Neighbourhoods clean up after storm

Much of southwestern Ontario is cleaning up after an intense storm rolled through the area on Friday night.

Signs of high winds and heavy rain remain in many neighbourhoods where trees are toppled onto cars, power lines, and in some cases, homes.

Environment Canada reports wind speeds hit 119 km/hr during the storm.  To put that into perspective, that’s the equivalent of a Level 1 hurricane.

Elderly couple Dodie Forthuber and Gerald Bronson were inside their Cambridge Avenue home in Kitchener when a giant tree was uprooted and came crashing down.  “I thought it’s not going to go through the window and the cats besides me and we are just… and I screamed, ‘the tree’s coming Gerald!”, said a shaken Dodie.

The pair aren’t sure the extent of the damage to their home.

On Dartmoor Crescent in Waterloo, winds knocked out a row of fences.  In all, four properties were affected.  Deirdre Large is one of them.  “We saw the panels on the left side flying through and then the right side panels went flying as well.”

Large, who now has a clear view into her neighbour’s yard several plots away, says she’s never seen such a thing.  “It’s like a perfect path cutting right through, it’s odd.”

The owner of Brantview Apple and Cider is still assessing the damage to his orchard.  “We are at 81 and we have only got through four rows so I’m guessing probably close to 300 (trees) by the time it’s all said and done”, says Jay Howell.

It will likely take anywhere from 24 to 48 hours to have all the debris removed from area roadways.

Toppled trees left many in the dark.

At the storm’s peak, between 15,000 and 20,000 customers were without electricty.  By Saturday morning, crews had restored a large portion of power but numerous pockets remain without power:

Most hydro organizations expect the power to be restored within 24 to 48 hours.

That’s of little consolation to those still in the dark, however.  Kitchener resident Kim Larose has been without power for 17 hours and counting.  “Actually, my sister is going to come… at least to get the fridges going.”

Hydro officials say several rounds of lightning are to blame for pockets of the outages.  President of Waterloo North Hydro, Rene Gatien, says crews couldn’t work until they knew there was little chance of further strikes.  “From upstairs in the control room we could see a light show of the whole sky lighting up but then forks coming down and we have to make sure people are safe from those kinds of things.”

In many cases, instead of waiting for help, neighbours broke out chainsaws late Friday night and tried to tackle the piles of debris left in the storm’s wake.

As he and his neighbours helped pull a large tree from a lawn, Mark Woelfe remarked on how a storm can bring communities together.  “It was really, really cool.  Everyone was in the street trying to band together to assess the damage.” 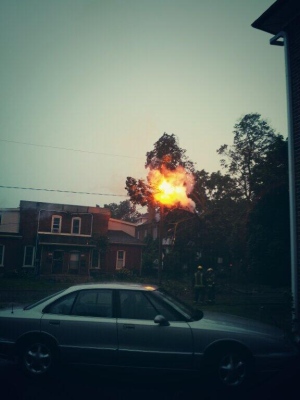