Provincial police responded to multiple crashes involving motorcycles, as tens of thousands of people attended a Friday the 13th rally in Port Dover.

At least one of those collisions was fatal and in two others, a rider was airlifted to hospital with serious injuries.

One crash happened just west of Port Dover around 1:14 p.m. In a media release, OPP said a motorcycle hit a vehicle at Blueline Road and St. Johns Road East. The motorcycle driver was taken to a local hospital where they were pronounced deceased. Their name has not been released. The other driver was not hurt.

Police said Blueline Road, between Highway 6 and Lynn Valley Road, and St. Johns Road, between Ireland Road and Cockshutt Road, would be closed for six hours while officers investigated.

Meanwhile, another motorcycle rider was airlifted to hospital after a crash just northeast of Port Dover.

Haldimand County OPP tweeted at 1:16 p.m. that they shut down Riverside Drive, between Rainham Road and East Quarter Line, while they investigated. Police said it was a single-vehicle collision. The motorcycle rider was transported to an out-of-town hospital by Ornge Air Ambulance.

Another serious motorcycle collision happened just south of Hagersville. In a tweet, Haldimand County OPP said one motorcycle rider was transported by Ornge to an out-of-town hospital. They added that the rider had life-altering injuries. Cheapside Road was closed between Concession 9 and Concession 11 while police were on scene investigating. 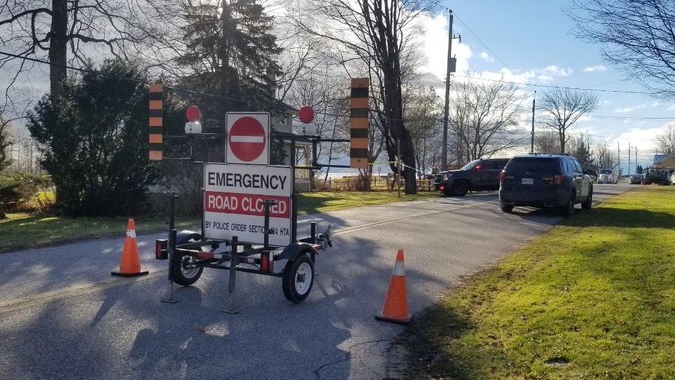 As of 12 p.m., police estimated over 100,000 people were attending the Friday the 13th biker rally in Port Dover, with more expected to arrive throughout the day.

In a Twitter update, Const. Ed Sanchuck said no major injuries were reported in those incidents.

Major traffic delays have also been reported due to the rally.

Two people were killed and 14 wounded on Saturday in a shooting at a nightclub and in nearby streets in Norway's capital Oslo, Norwegian police said.

The U.S. Supreme Court has ended the nation's constitutional protections for abortion that had been in place nearly 50 years in a decision by its conservative majority to overturn Roe v. Wade. Friday's outcome is expected to lead to abortion bans in roughly half the states.

They are the most fiercely polarizing issues in American life: abortion and guns. And two momentous decisions by the Supreme Court in two days have done anything but resolve them, firing up debate about whether the court's Conservative justices are being faithful and consistent to history and the Constitution – or citing them to justify political preferences.

With the U.S. Supreme Court’s decision to end constitutional protections for abortion, 26 states are likely to ban abortions; 13 of which are expected to enact bans against the medical procedure immediately.

An Ontario driver is speaking out after a shovel struck her windshield while she was driving on the highway.

Miners working in a gold field in Yukon have uncovered what is being called the 'most complete' mummified woolly mammoth found to date in North America, officials announced on Friday.