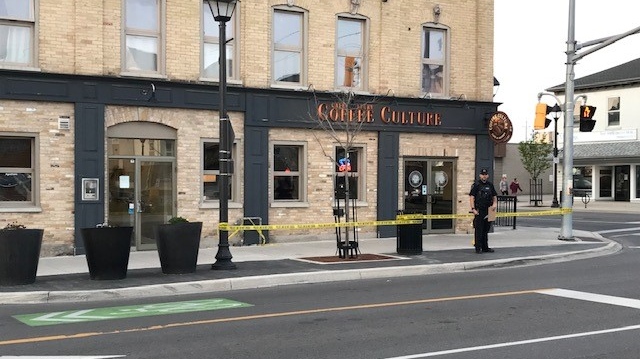 Police tape and an officer are visible at the scene of a stabbing in Cambridge on May 9, 2022. (Dave Pettitt/CTV Kitchener)

A man has been arrested in connection to a stabbing that took place on May 9 in Cambridge, according to Waterloo regional police.

It happened in the area of Main Street and Wellington Street.

Police said a 24-year-old Cambridge man was arrested and charged with:

Two people were involved in an altercation that led to one getting stabbed, police said.

According to police, the investigation is ongoing. Anyone with information is asked to call police or Crime Stoppers.

Three months since their arrival through a special evacuation program, Ukrainian families with children receiving care in hospital share their experience.

Two people are injured and a third is in custody after what RCMP describe as a 'public shooting' at a rodeo in Northern B.C. Sunday.

A Toronto woman says a dog she rescued from the Dominican Republic has been traumatized after being left in a corner of Toronto Pearson International Airport with baggage for about 21 hours.

Amid buzz around the medical benefits of magic mushrooms, a new production facility gets to work in B.C.

In southern B.C, there's a new 20,000-square-foot production facility where one particular product is generating a lot of buzz: magic mushrooms, which a handful of businesses have been federally approved to produce.

'There should have been one': N.S. mother drives son to ER after waiting nearly an hour for ambulance

A Nova Scotia mother says she had to drive her son to hospital herself on Canada Day when no ambulance showed up after more than 40 minutes.

Ohio man shot was unarmed when shot by officers: police

A Black man shot and killed by Akron, Ohio police officers in a hail of bullets following a vehicle and foot pursuit was unarmed at the time of the shooting.