In uptown Waterloo, there’s a new monument to Canadians who fought and died for their country.

Friday’s Remembrance Day also marked the unveiling of a light armoured vehicle III, which will permanently sit near the cenotaph. 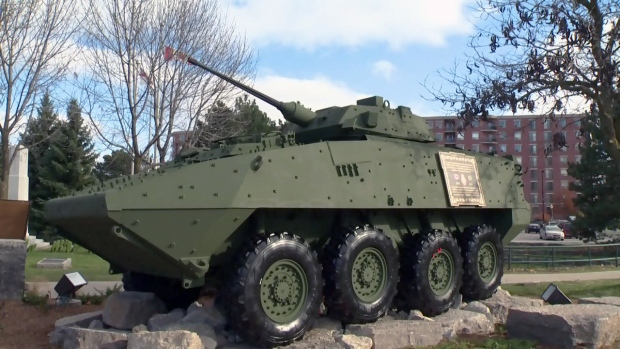 LAV IIIs have been installed in many other communities across Canada as well, as a specific reminder of the thousands of Canadians who served in Afghanistan.

Acquiring one for Waterloo was a six-month process that involved an application to the federal government and financial contributions from the community.

“There’s an opportunity here to make this a special place for veterans – not just one day of the year, but all throughout the year,” said Waterloo Mayor Dave Jaworsky.

“It’s an educational opportunity as well as a special sign of respect.”

Further encouraging people to stop and take a look at it, the LAV III will be lit up at night.

Carroll Loveday was in the crowd Friday as the monument was unveiled.

Not knowing what was about to happen, she found herself thinking of the day’s chilly conditions, and then thinking of her own family members who had served in Afghanistan.

“I was thinking of the soldiers in the mud and the dirt, the cold, the heat – they had no choice,” she said.

Friday afternoon, Loveday returned uptown to get another look at the monument and better take in its significance.

With reporting by Leena Latafat