A new fast food franchise in Kitchener has been greeted by many customers as well as protesters.

The Chick-fil-A on Fairway Road officially opened its doors to the public Saturday morning, with roughly 100 people lined up beforehand waiting to get in, and some even camping out overnight.

"Very worth it to wait the 13 hours," said customer Joshua Toma. 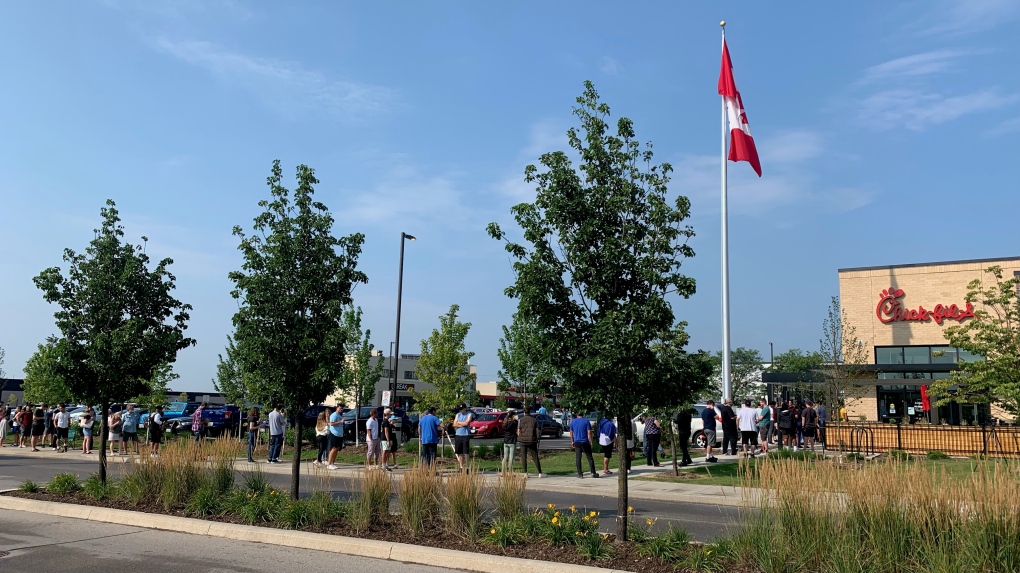 The line to get into the Fairway Road Chick-fil-A in Kitchener on its first day open. (Carmen Wong/CTV Kitchener) (Aug. 7, 2021)

Later in the morning, about a dozen protesters showed up at the location to demonstrate.

"When I see the people lining up, all I can think about is you're supporting something that has a huge impact on my life," said protester Holly Ardelean. "The more I see Chick-fil-A pop up in Canada, the more I worry for my freedoms and rights as a gay person."

The restaurant chain has attracted opposition from LGBTQ2S+ groups whenever a new store has opened, including the two locations in Toronto.

"We're compromising respect for the LGBTQ community," said protest organizer Gavynn Mckay. "Where you spend your money matters. I would hope some folks look it up when they get home."

Spectrum Waterloo Region issued a statement expressing concerns with the company and its CEO’s backing of conversion therapy and anti-LGTQ2S+ groups.

"We're not calling for a boycott, just for people to be aware of who they are and whether they want to spend their money there," said President Caitlyn Glasson.

In 2020, the Atlanta-based company's charitable arm, the Chick-fil-A Foundation, committed to stop donations to two groups that opposed gay marriage. They instead refocused its donations to homelessness, hunger, and education.

In a statement Chick-fil-A Kitchener said in part, "everyone is welcome and we respect people's rights to share their opinions."

Despite the protests, some customers say they plan to visit again.

"I can't comment on the people, I'm just here for the food and hospitality," said customer Ankush Verma. "They haven't done anything to directly target me."

In celebration of the grand opening, Chick-fil-A will be donating $25,000 to the Waterloo Region Food Bank.