'It's disturbing': Number of Project Safe Semester charges highest ever, homecoming days away

'It's disturbing': Number of Project Safe Semester charges highest ever, homecoming days away

Officials with the Waterloo Regional Police Service (WRPS) are on high alert ahead of homecoming weekend as charges with the annual Project Safe Semester have hit new high.

On Tuesday, WRPS Acting Chief John Goodman said the charges in the annual Project Safe Semester have already eclipsed previous years, and that’s ahead of the actual homecoming weekend.

Project Safe Semester is a month-long blitz cracking down on unsafe behavior among university and college students and has seen charges double in 2022 compared to 2021.

“This is the most charges we’ve ever laid in terms of safe semester, and we haven’t even hit homecoming weekend. Our criminal charges are up, students are out and about, but they need to show respect, they need to be accountable for their actions, and they need to understand they’re actually visitors to our community and they need to respect the people in the neighborhoods who live there,” Goodman said in an interview with CTV News.

“We had a safe semester plan that’s been in place since the second last week of August, and I can tell you that’s it’s disturbing that the charges are what they are to date.”

Last year, liquor-related offenses were by far the most common charges laid with 132 liquor license act offences handed out.

“It’s a dangerous situation when you have that many people out and about, intoxicated, misbehaving. So just – again – be respectful to people, own your actions and be accountable,” said Goodman.

Wilfrid Laurier University tweeted on Tuesday asking students to consider how they represent the school ahead of the homecoming weekend.

As you think about #LaurierHomecoming weekend, think about what it means to be a Laurier Golden Hawk, how you represent yourself to our alumni and the Cities of Waterloo and Brantford, and the impact of your choices.

“Your safety is our top priority, which is why the university, the police, the city and our emergency services partners actively discourage students from taking part in unsanctioned street gatherings. The Waterloo Regional Police Service will have an increased presence. Hit the stadium, not the street – attend an organized Homecoming event with friends,” the university said on its website.

The university and police forces plea to students comes following a large unsanctioned party earleir this month which left a trail of damage along Ezra Avenue. 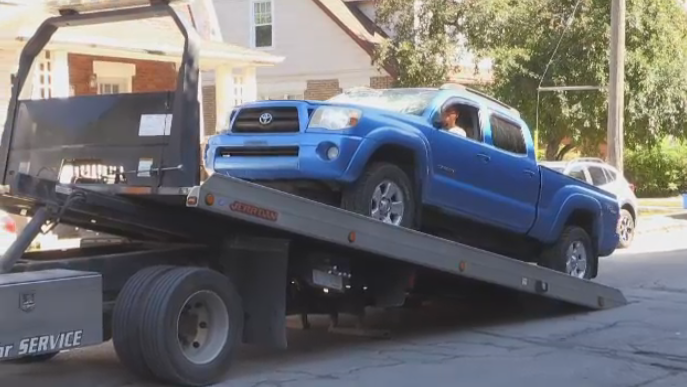 A heavily damaged truck is towed away after a gathering on Ezra Avenue. (Jeff Pickel/CTV News Kitchener)

Videos of the gathering showed people damaging vehicles, one of which was a truck that sustained heavy damage.

Following the gatheirng, WRPS released photos of individuals they wanted to identify in connection to the Ezra Avenue gathering.