'I was disappointed': Party along Ezra Avenue in Waterloo leaves trail of damage

'I was disappointed': Party along Ezra Avenue in Waterloo leaves trail of damage

Owen Brawley said he received a phone call around 4 a.m. on Tuesday informing him his pickup truck was ruined.

Parked on Ezra Avenue, Brawley’s truck was one of the many pieces of personal property damaged during a large gathering on Monday.

“[I’m] disappointed for sure, I was disappointed. I haven’t had a lot of luck with this truck. It was stolen once before in this area, now it’s obviously been heavily vandalized,” said

The windshield was smashed, the hood and roof had been crumpled in, the mirrors were torn off and even the license plate had been stolen.

Police say there were several reports of property damage stemming from a large gathering on Ezra Avenue Monday night that left a trail of damage in Waterloo’s university district. 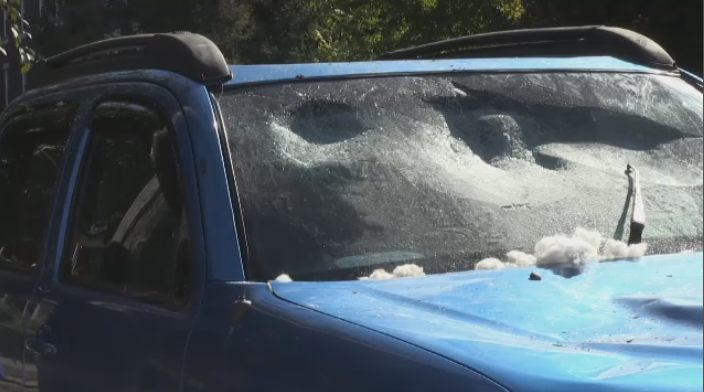 The damage to a truck after an Ezra Avenue gathering. (Jeff Pickel/CTV News Kitchener)

Video posted on social media and geotagged to Ezra Avenue shows the area packed with hundreds of people, litter-strewn across the street and flashing emergency lights.

In another video, several people could be seen climbing on top of a blue truck.

One of the videos posted online appears to show an individual holding a golf club and repeatedly swinging the golf club into the windshield of the vehicle.

“There is clear video all over. I mean I don’t know what they were thinking. There is a big group of 100’s of people, you have to know there are going to be videos,” said Brawley.

Brawley said he is not a student at the University of Waterloo or Wilfrid Laurier University.

He said he parked his truck on Ezra Avenue overnight to visit his girlfriend who lives close by.

Witnesses say hundreds of people were on Ezra Avenue Monday night, with a small number in the crowd behaving very recklessly, including crowd surfing.

It's not clear if the people involved in the destruction are students at nearby universities, but a representative from Laurier said if they are the consequences will be severe.

“At Laurier that could lead to suspension or expulsion. If you are found damaging cars burning mattresses lighting places on fire, that type of activity is not acceptable, and we don’t want those students part of our community,” said Ivan Joseph, vice-president of student affairs at Wilfrid Laurier University.

When speaking to CTV News, students who just moved to Waterloo days ago, say they find this behaviour shocking and concerning.

“I was a little scared. I just chose Laurier for the program. I didn’t realize it was a crazy party school, and now there are people getting injured,” one student told CTV News.

Waterloo regional police said officers responded around 11:30 p.m. on Sept. 5 to reports of a large gathering in the area of Ezra Avenue and Clayfield Avenue in Waterloo.

Police said a man was struck in the head by what is believed to be a side-view mirror of a vehicle that had been thrown into the air. Another male was injured after falling.

The crowd dispersed after approximately three hours, and a street sweeper was brought in to clean up an extensive amount of litter and debris that was left behind, according to police.

Mayor of Waterloo Dave Jaworsky said there is heightened monitoring of the university districts during certain days and times during the school year, including the start of September.

While he didn't get into specifics of what's planned in response to the Monday night gathering, he said it always prompts a review of what the city and its partners are doing.

Jaworsky noted that with about 50,000 students arriving for the school year, only a fraction are taking part in parties like the one recently seen on Ezra Avenue.

He also had this message for those who may now have some regrets.

“There's always a good way to go out and know your community. To go visit our retailers. To apologize. That's always something you can do, and it's well appreciated. "

Jawarsky said students can work with the university should they have problems or any challenges.

"Universities and colleges are well set up to offer your advice. This isn't a one strike and you're out type of community. But we want to make sure everyone has the best chance of success. And if you've fallen off the beaten path there's lots of people here in the community to help you get right back on,” he said.

Ward 7 councillor Tenille Bonoguore said the students who have chosen to call Waterloo region home need to remember to be good neighbours across the community.

“This is your home now, which is awesome, but we want you while you're here to really step into your potential and to step up,” said Bonoguore. “I mean that's what university is all about. You could be changing the world, you can be helping the planet, you can have a real impact right here right now in the place that you have chosen. So, I think that we would ask is don't cheapen that, don't waste that. All we need is for people to be good neighbours.”