How Bobbi Ann Brady became the province's only Independent MPP-elect

An Independent candidate, with the support of a former long-time Progressive Conservative MPP, has won the riding of Haldimand-Norfolk.

Bobbi Ann Brady is now the province's only Independent MPP-elect.

“I am pleased that we defied the odds. I was told when I decided to do this that I would embarrass myself, that I would only get five per cent of the vote,” Brady told CTV News following her victory.

Haldimand-Norfolk was previously held by PC Toby Barrett who announced he would not be seeking an eighth term in April.

“I've given 23 years of my life to the party and I've worked for MPP Toby Barrett for 23 years and we weren't afforded a nomination night here,” Brady said. “We were just told the candidate would be who it was, and local Conservatives weren't impressed by that move.”

With all the polls tallied, Brady had 35 per cent of the vote. Hewitt had 30.5 per cent.

“It's a message to all the political parties that you can't take folks for granted - for their money and for their vote,” Brady said.

Speaking to CTV News on Friday, Barrett said he chose to endorse Brady over Hewitt for one reason.

Barrett said it wasn’t their idea to have her running as an Independent, but they had no other choice. He said since they didn’t have the help of a political party with the campaign, they did it the “old-fashioned way.” 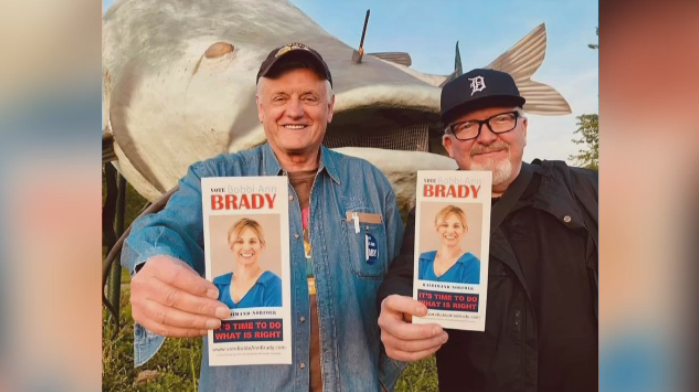 Peter Graefe, a political science professor at McMaster University, said he was surprised when the results rolled in.

“It’s quite a feat. I’d have to say, it wasn’t even on anybody’s radar until yesterday,” Graefe said, calling an Independent win like Brady’s “very rare.”

“In cases where that happens it’s usually someone who had been a known politician who had a falling out with their party, who then got swept in by local constituents. But even that is very rare because most people vote for parties and not for candidates,” Graefe said.

Brady said when she gets to Queen’s Park, she plans to be a voice for all her constituents.

In a full circle moment, Barrett said he plans to work for Brady.

“We will essentially switch rolls,” he said.

A large chunk of Alpine glacier broke loose Sunday afternoon and roared down a mountainside in Italy, sending ice, snow and rock slamming into hikers on a popular trail on the peak and killing at least six and injuring eight, authorities said.

The remaining businesses on Shelbourne Street in Saanich, B.C., that had been closed after last week's shooting at a Bank of Montreal branch have now reopened, police say.

CTVNews.ca asked Canadians to share their travel horror stories as cancelled flights, delays and lost luggage throw a wrench in Canadians' summer travel plans, due in part to staffing shortages at Canadian airports. Some report sleeping at airports and others say it took days to get to or from a destination.

It's been said no one's success is complete without failure, but a new international exhibit in Calgary is proving that even some of the most talented innovators had some of the worst ideas for consumers.

'Ungrading': How one Ontario teacher is changing her approach to report cards

An Ontario high school teacher plans to continue with an alternative method of grading her students after an experiment last semester in which students proposed a grade and had to justify it with examples of their work.