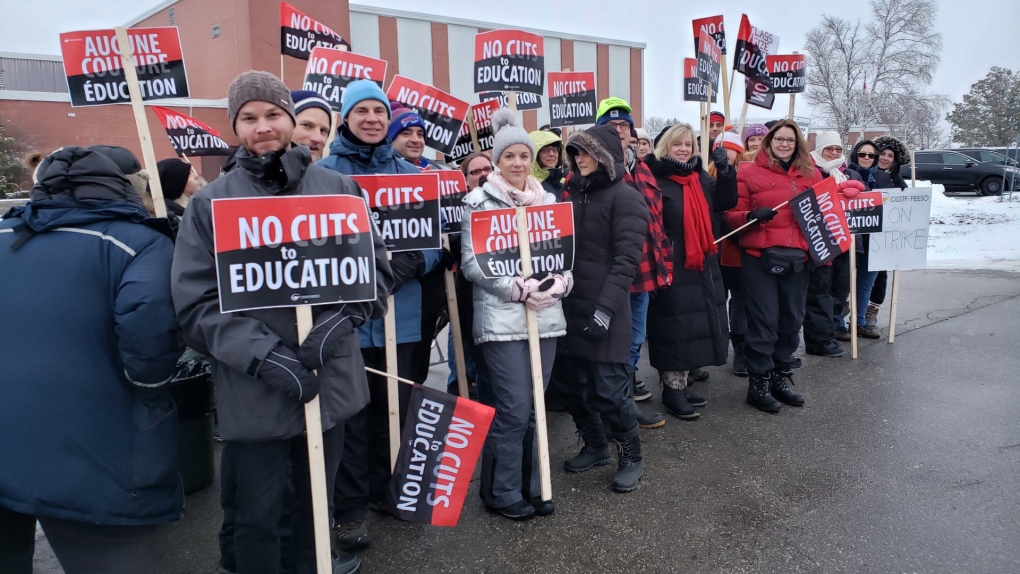 The 60,000 members of the Ontario Secondary School Teachers Federation will be going on another one-day strike on Dec. 11. (OSSTF District 24/ Twitter)

TORONTO -- High school students in Toronto and other regions in Ontario will be out of class again next week as teachers and education workers involved in contentious contract negotiations with the province plan to hold another one-day strike.

The Ontario Secondary School Teachers' Federation -- which represents 60,000 educators -- said Friday that high school teachers in nine district schools boards will hold a one-day strike on Dec. 11. A similar job action closed all high schools -- and many elementary schools -- in the province on Wednesday.

"We absolutely understand that our targeted job actions create a temporary disruption for the students and families affected," said union president Harvey Bischof. "By contrast, the (Premier) Doug Ford agenda, if it is allowed to be implemented, will create long-term disruption for students across the entire education system, and leave publicly funded education in Ontario deeply and permanently damaged."

The teachers, who are already conducting a work-to-rule campaign, say they are pushing back against the Ford government's plans to increase class sizes and introduce mandatory e-learning courses -- measures Progressive Conservatives say are needed to trim a $7.4-billion budget deficit.

Education Minister Stephen Lecce said the key issue at the bargaining table was compensation, with the province offering a one-per-cent annual wage increase, and the union asking for around two per cent.

Lecce condemned what he called further escalation of the situation by the teachers' union.

"I'm saying that is unacceptable and incongruent with the priorities of any parent in this province," he said. "We stand with parents against escalation."

The minister urged the union to sit down with the government and a third-party mediator in a bid to reach an agreement so students can remain in school.

"The government needs to reverse all these cuts, get back to the table and get a deal," she said.

"Teachers will not sign off on a plan that pulls thousands of educators out of schools and drags Ontario down to the level of US states that replace teachers with mandatory e-learning," he said in a statement.

In addition to the Toronto District School Board, eight other boards across the province will be affected by the Dec. 11 strike:

This report by The Canadian Press was first published Dec. 6, 2019.