A Guelph, Ont. family is grieving the loss of a 19-year-old who died after he was hit by a car while riding his motorcycle Friday night, and his mother is asking the community for compassion for the 17-year-old driver involved in the fatal crash.

On Friday Sept. 9, Matthew Framst was killed while riding his motorcycle in Guelph, just a few blocks away from where he lived.

“I was just going to bed and I heard sirens and something just hit me in the gut, and I knew,” says Tania, Matthew's mother.

Matt was riding his motorcycle at Grange Road and Kearney Street when an SUV driven by a 17-year-old hit him.

He was taken to hospital where he later died.

“We did our thumbs up where we touched thumbs that was our thing. He said goodbye. I said 'Be safe.' He said 'Don’t worry mom.' And that’s the last time we saw him,” Tania says through tears.

The driver of the SUV was not injured and has been charged with careless driving causing death. Tania is asking those who cared for Matt to show the young driver compassion.

“I don’t think it was malicious and I think this person will have to live with this themselves and I don’t want to bring further anything to this young person,” she says. 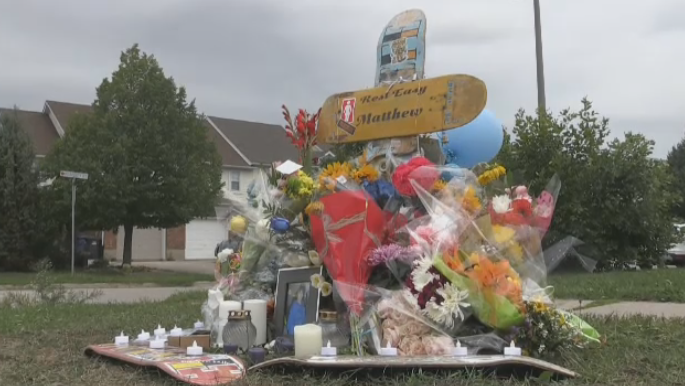 There’s a growing memorial for Matt, including bouquets of flowers, candles and skateboards.

“He had his skateboard everywhere he went,” Tania says.

His mom remembers him as an adrenaline chaser from birth and an avid skateboarder who always had the biggest and brightest smile.

“He wouldn’t stop until he perfected a trick and he would come home so sweaty and sunburnt and dehydrated,” Tania says.

That’s why Matt’s family has chosen to honour his memory by setting up a fundraiser to install a water fountain or refill station at the Guelph skate park. It's a place where Matt spent countless hours.

Matt’s celebration of life is scheduled for Sept. 17 at the Arboretum Center at The University Of Guelph. Guests are asked to wear bright colors and bring their dancing shoes because Matt loved to dance.

“He would put on 'So What'cha Want' from Beastie Boys and we would clear this space and he would take off his clothes and dance in his underwear,” Tania recalls.

Tania says with family, friends and the community by her side she knows that someday everything will be okay.

The Senate passed bipartisan legislation Tuesday to protect same-sex marriages, an extraordinary sign of shifting national politics on the issue and a measure of relief for the hundreds of thousands of same-sex couples who have married since the Supreme Court's 2015 decision that legalized gay marriage countrywide.